More than 100 people have been killed by Lassa fever outbreak in Nigeria, as West Africa battles to contain a flare-up of the virus, according to data from the nation’s health authorities.

Nigeria Centre for Disease Control (NCDC) statistics released on Saturday show that reported cases of the acute haemorrhagic disease – both confirmed and suspected – stood at 175 with a total of 101 deaths since August.

“As at today, 19 (including Abuja) states are currently following up contacts, or have suspected cases with laboratory results pending or laboratory confirmed cases,” the NCDC said in a statement.

Deaths from the virus were recorded in the nation’s political capital, Abuja, Lagos, and 14 other states, the NCDC said.

Officials said they have distributed large quantities of drugs, including Ribavirin tablets, and bottles of hand sanitisers across the country to tackle the disease.

The NCDC said that logistics support and delayed reporting of cases by states were hampering the fight against the viral fever.

The outbreak was only announced in January – months after the first case occurred in August – with subsequent deaths reported in 10 states, including Abuja.

In neighbouring Benin at least nine people have died in a Lassa outbreak, with a total of 20 suspected cases, health authorities said on Tuesday.

The number of Lassa fever infections across West Africa every year is between 100,000 to 300,000, with about 5,000 deaths, according to the US Centers for Disease Control and Prevention.

The disease belongs to the same family as Marburg and Ebola, two deadly viruses that lead to infections with fever, vomiting and, in worse case scenarios, haemorrhagic bleeding.

Its name is from the town of Lassa in northern Nigeria where it was first identified in 1969.

Endemic to the region, Lassa fever is asymptomatic in 80 percent of cases but for others it can cause fever, physical fatigue, nausea, vomiting, diarrhoea, headaches, abdominal pains, sore throat. Neck or facial swelling can sometimes be observed.

Ribavirin is an efficient treatment to fight Lassa fever. This drug can treat infected people if it is administered as soon as the first signs appear.

The virus is transmitted to humans from contacts with food or household items contaminated with rodent faeces. The disease is endemic in the rodent population in parts of West Africa.

The virus, which has an incubation period of between six to 21 days, can also be transmitted through contact with an infected person via biological liquids: blood, urine, saliva, sperm, vomit, faeces. 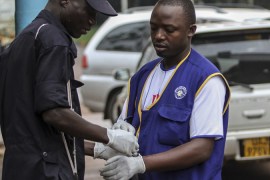 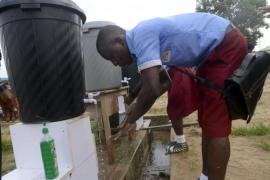 WHO lauds “spectacular success story” as Nigeria declared free from Ebola after 42 days without new cases. 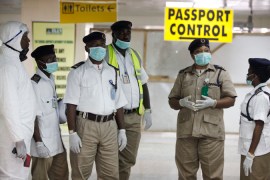 Move follows appeal to make up for shortage of medical personnel due to doctors’ strike over pay.