At least 55 Iraqi soldiers and pro-government tribal fighters have been killed in two attacks attributed to the Islamic State of Iraq and the Levant (ISIL) group in the country’s western region, near the city of Ramadi.

The first attack took place in the early hours of Tuesday when several suicide car bombers attacked the headquarters of the tenth Iraqi army division in northern Ramadi, killing 30 soldiers and pro-government fighters.

Previously held by ISIL, Anbar’s provincial capital was recaptured by Iraqi forces three weeks ago, though ISIL remains strong in some pockets, particularly in the city’s eastern district and in the al-Sijariya neighbourhood.

Iraqi security forces have meanwhile stopped escalating their offensive in the eastern parts of Ramadi, in an effort to minimise civilian casualties. They accuse ISIL of using families there as human shields during ongoing military operations.

Separately, at noon on Tuesday, a dozen ISIL suicide car bombers tried to breach the Iraqi army barracks on the border of al-Baghdadi city, west of Ramadi, killing 25 Iraqi soldiers and tribal fighters in the process.

The ISIL fighters were prevented from entering al-Baghdadi after heavy fighting with Iraqi soldiers and air strikes by the US-led coalition.

The attacks come a day after Iraqi forces uncovered more than 40 bodies, including those of women and children, in a mass grave in Ramadi.

OPINION: How Iraq recaptured Ramadi and why it matters

Similar mass graves have been found in other areas recaptured by Iraqi forces from ISIL in Syria and Iraq. 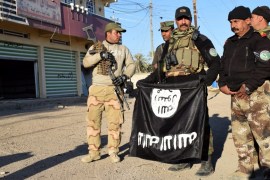