Protesters clashed with police in Haiti’s capital Port-au-Prince as thousands marched against President Michel Martelly’s government on a day that was supposed to see a vote to elect his replacement.

The demonstrations, on the fifth day of anti-government protests in the capital, saw markedly less violence than on previous days, in which protesters hurled stones and smashed windows.

Critics of Martelly believe that he unfairly favoured his chosen successor, Jovenel Moise, a banana exporter, who came first in the first round of voting in October.

The UN, international election observers and foreign governments urged calm and dialogue among the country’s feuding politicians to negotiate a solution to the electoral impasse.

In a statement, Ban Ki-moon, the UN secretary-general, expressed concern and pressed Haitians to work towards a “peaceful completion of the electoral process without delay”.

Haiti’s charter requires a new government to take power on February 7, but election authorities say there is no chance that the country will meet that deadline to pick a new president – threatening a constitutional crisis.

Given the short timeline, some form of interim government is likely to be formed to oversee the election process, yet it remains unclear how the fractious country would settle on a temporary solution
until elections can be rescheduled.

“We have less than two weeks until February 7, and there is no way to have another election before then. So it will be up to parliament and the relevant political parties to agree on a transitional government,” Antonal Mortimer, a human rights campaigner, told Al Jazeera.

Haiti, the poorest country in the Western hemisphere, has been unable to build a stable democracy since the 1986 overthrow of the Duvalier family. 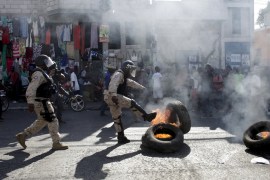 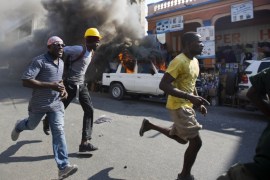 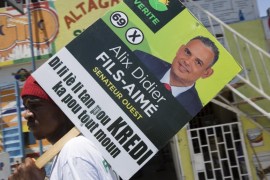 Parliamentary polls being held on Sunday, but many people are more concerned about poverty and high unemployment.