Egypt marked the fifth anniversary on Monday of the 2011 revolution that toppled long-time ruler Hosni Mubarak, as residents witnessed a security forces build-up in the streets of the capital, Cairo.

President Abdel Fattah el-Sisi paid tribute to the January 25 uprising, pointing out that protesters killed during the 18-day revolt had sought to revive “noble principles” and found a “new Egypt”.

Sisi’s praise in a televised speech on Sunday  followed a recent spate of arrests and a heightened security presence in Cairo.

The build-up of security forces reflects the government’s resolve that the occasion will not be marked by popular demonstrations or attacks by armed groups.

The president’s speech came just one day after Sisi, a soldier-turned-politician who won office in 2014 following a landslide election victory, praised the country’s police and vowed a firm response to any threat to the country’s stability.

His nod to the police ran against growing complaints by rights activists that the force has returned to Mubarak-era practices like torture, random arrests and, more recently, forced disappearances.

Police brutality was among the complaints that drove Egyptians to take part in the 2011 uprising.

Sisi said the 2011 uprising had deviated from its course and was forcibly hijacked for “personal gains and narrow interests”.

That was a thinly veiled reference to the Muslim Brotherhood, which has been banned and declared a terrorist organisation after Sisi, as military chief, led the ouster in July 2013 of Morsi, who hails from the Brotherhood.

The “June 30 revolution” – a reference to the day in 2013 when millions of Egyptians demonstrated on the streets against the rule of Morsi and his Muslim Brotherhood – corrected the course of the 2011 uprising, Sisi said.

That revolution, he said, took place to “restore the free will of Egyptians and continue to realise their legitimate aspirations and deserved ambitions”.

“Egypt today is not the Egypt of yesterday. We are building together a modern, developed and civilian state that upholds the values of democracy and freedom,” he said of the two-and-a-half years since the removal of Morsi, Egypt’s first freely elected president.

“Democratic experiences don’t mature overnight, but rather through a continuing and accumulative process,” he said, before emphasising the need to exercise “responsible freedom” to avoid “destructive chaos”.

The rhetoric, and insistence that gradual democratisation is key to stability, mirrored that of Mubarak during his 29-year authoritarian rule.

Sisi has since 2013 presided over what the human rights group Amnesty International describes as an “unprecedented” crackdown on dissenters.

Thousands of Brotherhood supporters, as well as scores of liberal, pro-democracy activists have been detained.

In the recent days, security forces have questioned residents and searched over 5,000 apartments in Cairo’s downtown, an area whose cafes, theatres and art galleries have been popular with young, pro-democracy activists.

Administrators of Facebook pages organising protests have also been detained.

Sisi’s supporters, including several high-profile TV presenters and talk show hosts, have often justified actions by the police and security agencies as necessary to spare Egypt from chaos and bloodshed. 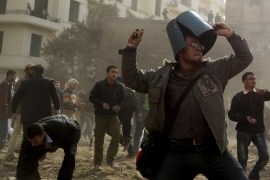 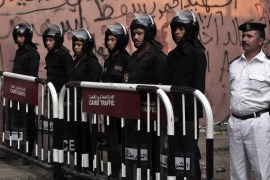 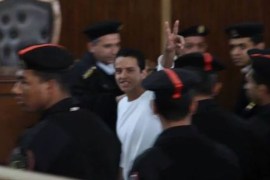 Concerns abound over the fate of Mahmoud Hussein, 20, who was imprisoned for “illegal protesting” two years ago.