A commander in Joseph Kony’s Ugandan rebel group will attend a hearing at the International Criminal Court, to assess whether evidence against him is strong enough to merit making him stand trial for war crimes.

Ben Gumpert, prosecutor at the ICC, said on Thursday that Dominic Ongwen, a longtime commander in the Lord’s Resistance Army (LRA) “bears significant criminal responsibility” for brutal attacks during which civilians were killed and tortured, and women and children were abducted.

“People were murdered, dreadfully wounded and maimed. Houses were burned, but above all, people were abducted, either to become fighters in the LRA or to become sex slaves,” Gumpert said.

Al Jazeera’s Malcolm Webb, reporting from Lukodi in northern Uganda, said there was a lot of interest in the case in the town.

“At a school, a television screen and projector has been set up for people to watch a live streaming of the hearing,” Webb said.

Ongwen only rose through the group’s ranks after himself being kidnapped at the age of 10, a fact that makes him an awkward target for a court set up 13 years ago to hold the powerful to account for very grave crimes.

Gumpert said Ongwen’s own history was by no means unusual and did not mean he merited special treatment.

“Almost every LRA fighter …. by the period 2002-05 had himself or herself been abducted,” Gumpert said.

“It is in order to try to strike at that continuing evil that the prosecutor is keen to prosecute crimes arising from conscription.”

Defence lawyers will push at a session next week for the charges against Ongwen to be thrown out.

Ongwen faces 70 charges including murder, rape, torture, forced marriage and using child soldiers stemming from his alleged involvement in attacks on refugee camps in Uganda in 2003 and 2004.

Ongwen surrendered in January 2015 to United States troops in a remote eastern part of the Central African Republic.

Kony is the only LRA commander still at large out of five LRA commanders indicted by the ICC in 2005. Three have since died, the Ugandan army said.

The LRA launched an armed rebellion in Uganda in the 1980s and committed widespread atrocities, raping and maiming civilians who were reluctant to join its campaign. 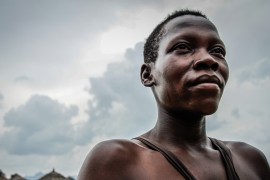 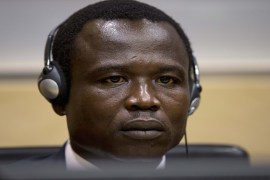 Former LRA child soldier on trial at The Hague

Lord’s Resistance Army commander known for brutality is the first from feared rebel group to appear before the ICC. 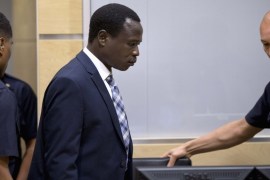 Dominic Ongwen, accused of crimes against humanity, takes stand at Hague-based court and thanks God.