New York City – At a memorial for her Jewish mother who died in 2012, Tami Gold put a white scarf she bought in Palestine on the gravestone, closing her eyes and singing John Lennon’s Imagine.

It had been the favourite song of her mother – an opponent of Israel’s occupation of Palestine – and the lyrics represented who she was politically, philosophically and spiritually.

“Imagine there’s no countries,” she sang with her sister and some friends. “It isn’t hard to do. Nothing to kill or die for. And no religion too.”

But when the mourners opened their eyes and were leaving, reality crashed in: Her uncle arrived and approached Gold to give her an envelope. It contained a formal letter acknowledging that he had donated money in the name of her mother to the Friends of the Israel Defense Forces, a New York-based group that channels donations to the Israel Defense Forces.

“I was honouring my sister,” Raymond Rickman, the uncle, said of his action.

“My sister wrote a handwritten letter and sent it to him, saying what he did was a violation of my mother’s spirit and commitment in life, and that he sabotaged our memorial for my mother,” she said.

Standing up for Palestinians

Over the years, some American Jews have turned vocal opponents of Israeli’s occupation of Palestine and ardent champions of Palestinian rights.

Critics of these activists say they are breaking away with Jewish traditions or turning traitors to their own cause, pitting them against their families, friends, or the communities that once embraced them.

But Jewish activists for the Palestinian cause are adamant that they will not budge in their convictions.

Despite the conflict with her uncle, Gold, a professor of film and media studies at Hunter College in New York, and a group of activists have forged ahead with the production of a documentary about the occupation of Palestine. The documentary, entitled The Coming Intifada, which is still in the making, “is an opening for how oppression can breed courage, resistance, radical imagination and love”, according to its website.

Sitting in her home on a rainy day, Gold quickly saved on her laptop a video that purportedly showed a group of Israeli soldiers fatally shooting a Palestinian woman who was driving by in her car, out of fear that the disturbing video would soon be taken down from YouTube.

“It is these kinds of grotesque atrocities against the Palestinian people that motivates me to speak out as a Jew,” she said.

Such pushback is not just within families, however. It also happens within congregations in a country where rabbis who oppose Israel’s actions are still grappling to find their voice.

A study released in 2013 by the Jewish Council on Public Affairs found that almost half of the rabbis surveyed refrained in the preceding three years from publicly expressing their views on Israel. Nearly 40 percent of them sometimes or often avoided expressing “true feelings about Israel and its conflict with the Palestinians” for fear of offending their listeners or those around them, according to the study, entitled Reluctant or Repressed? Aversion to Expressing Views on Israel Among American Rabbis.

Rabbi Brant Rosen, 53, is a harsh critic of the Israeli occupation of Palestine. Though he had been to Palestine many times, it was not until the Gaza War in 2008 that his pro-Palestine stance began to manifest itself. In 2010, he co-founded the rabbinical council at Jewish Voice for Peace, a vocal opponent of Israeli policies on Palestine and its people. He is no stranger to pro-Palestine solidarity marches down Chicago’s Michigan Avenue and often blogs about the conflict with a strong advocacy for Palestinian rights.

Inevitably, his activism estranged him from his own congregants at the Jewish Reconstructionist Congregation in Evanston, Chicago, where he had been a rabbi for 17 years, prompting a group of 25 member households to send a letter in protest in May 2014.

“I understand that there are people who find my view very painful to deal with,” he told Al Jazeera. The backlash “was extremely painful and it still is”, he said.

But Rosen, who has already been at odds with friends in Israel over this issue, stays steadfast to his activism. In September 2015, he founded Tzedek Chicago, which identifies itself as non-Zionist, making it a rare congregation in the United States.

The move has yet again raised eyebrows from his critics.

“Why would someone want to define a community by what you’re ‘not’?” said Rabbi Joshua Weinberg, president of Association of Reform Zionists of America. “I think Rosen’s issue is that he basically took the point of view that he really didn’t think that the state of Israel should exist. That, for me and most mainstream Jews, is crossing the line.”

Rosen brushes off such criticism.

“I’ve never called for an end to the state of Israel,” he said. “When we call it non-Zionism, it’s part of a larger frame of values in which we reject nationalism of any kind. It does not value one people over another.”

When Henry Herskovitz found that few people would say hello and talk to him at a recent Christmas party in Ann Arbor, Michigan, it did not come as much of a surprise to a man that the local press called “the most controversial man” in the city.

“I will be even less popular the next time you talk to me,” Herskovitz said.

Since 2003, Herskovitz, a retired mechanical engineer, and several other people have coalesced the Jewish Witnesses For Peace and Friend group to stage what they call “silent protests” outside the Beth Israel Congregation in Ann Arbor every Saturday morning.

Herskovitz said he took on the protest after the synagogue refused to let him in to present a slideshow of photographs that featured human rights abuses at a Palestinian refugee camp after he went there in 2002.

Rabbi Rob Dobrusin of Beth Israel dismissed the request, saying that the synagogue certainly would not grant access to a group that is “disrespectful to our community and our congregants and counterproductive to true dialogue”.

No compromise has been made from either side since.

According to Herskovitz, his withdrawal is contingent on the congregation denouncing the existence of Israel or dissociating itself from that country. “This is not going to happen,” Beth Israel reiterated in an information pamphlet disseminated to its congregants.

Herskovitz has a few supporters. According to his fellow protester Rudy List, Herskovitz’s anti-Israel stance is “the result of principled objective considerations of all available evidence”.

Chris Mark, another fellow protester, said: “Many people say he is the most hated man in the city. I don’t believe that.”

Such support is dwarfed by the hornet’s nest that Herskovitz has stirred, however. “There are friends that I used to play cards with or play baseball with who no longer speak to me,” he said.

But for a 69-year-old man whose parents passed away and who has no family of his own, the “most painful break-up” as a result of his activism came from a man named Jeff Epton, who was his best friend for 35 years until 2007.

A Jew who himself is an opponent of Israel’s occupation of Palestine, Epton recalled that when Herskovitz started the protest, he advised him against holding signs such as  “Israel is an apartheid state”.

“That is not because I disagree,” said Epton, who was a city councillor in the 1980s and now lives in Washington DC. “That is because I think holding such a sign is more of a way of slamming the door on the discussion. If you want to begin to address the political differences, you wouldn’t start the discussion by saying something that would immediately anger them and make them unwilling to talk to you.”

After failing to find common voice on this, “over time it was harder and harder to keep associating with each other. Henry now is not Henry that I was so close for 35 years”, Epton said.

He recalled an email he wrote to Herskovitz when their friendship was on edge. “You’re on a journey, man. I think you’re going somewhere I can’t go. I’ll be here if you ever come back.”

But Herskovitz said that he has never responded to that email and it will be business as usual for the protest to forge ahead. The number of demonstrators has fluctuated between five and eight depending on the week; it had up to 15 from the outset, but several have died of old age.

Asked what the future looks like for his activism, Herskovitz said: “I tend to look towards the positive and not the negative. If one day there is just me, I will just stand up there by myself.” 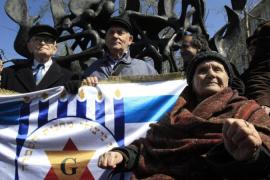