Police charges carrying prison sentences of up to 10 years in jail made against volunteer lifeguards who rescue refugees have angered the NGO community in the Greek island of Lesbos, with some reporting a growing crackdown on their activities.

They are accused of people smuggling, Themistoklis Kefalas, a Danish citizens’ lawyer, confirmed to Al Jazeera.

Late on Saturday, the five volunteers who all deny the charges were released on bail.

The group will appear in court soon, though a date is not yet set.

“The only thing I can tell you is that they are good guys,” Kefalas told Al Jazeera. “If found guilty, according to Greek law, they face between five and 10 years in jail.”

Video footage on Team Humanity’s Facebook page shows volunteers from around the world protesting against the detentions outside the courthouse in the island’s capital city of Mytilene, calling for the charges to be dropped.

Petitions have also been set up. One in support of the Spanish volunteers gathered some 35,000 signatories in two days.

Speaking to Al Jazeera on Saturday, Ayman Elghiouane, 21, a volunteer from Team Humanity, said: “Everybody is happy for us being there; I’m wondering why the coastguard did this.”

He added that in recent weeks, police have started slapping parking fines on volunteers, where before they had not, signalling a shift in treatment towards the community.

“Their [the Greek authorities’] attitudes have changed,” said Elghiouane, one of 40 or so volunteers who has worked for Team Humanity, which launched in September.

There are around 80 NGOs working on the island, and thousands of volunteers.

Volunteer rescue teams are required to communicate with the coastguard when they go to rescue refugees by sea.

“We always call [the coastguard] for permission before we head out to the water,” Elghiouane said.

“Right now, we can still do our work, but I don’t know what the court will say. I think there is a crackdown on volunteers; maybe they want to scare us.”

The mayor of Lesbos has before complained that the influx of volunteers who do not cooperate with the municipality is “disruptive rather than useful”.

But Elisabeth Dimitras, an individual volunteer who has before collaborated with groups including Team Humanity, told Al Jazeera that the detained group was communicative and dedicated.

“I worked with Salam Aldeen [of Team Humanity] for one month,” said Dimitras, who has made three trips to the island to volunteer. “He has no bad intentions. For sure, he’s not a smuggler.”

She added that Greek officials quoted in local media say that they wish the volunteer community was more controlled, in terms of registering properly with authorities and working with the local governments.

“I also think NGOs should be controlled, but you cannot go around arresting volunteers.

“I’m really worried that the authorities think that as long as we’re there, the refugees will keep coming. And if we’re not, they will not come – which is not true.”

Dimitras cited examples of increased pressure on volunteers, such as the arrest of an unrelated volunteer who took a photo with a Frontex patrol boat in the background.

“The Greek coastguard in Lesbos only has around three or four boats,” she added, justifying the volunteers’ work. “Even some captains at the coastguard are completely burned out.”

According to the UNHCR, of the 660,000 refugees and migrants who reached Greece in 2015, more than half landed at Lesbos.

Team Humanity’s Elghiouane estimated that while numbers were down from September highs, when some 10,000 refugees would arrive in one day, around 1,000 refugees now reach the Greek island per day.

The number has fallen due to poor weather.

“People are still drowning,” Elghiouane said. “Before, we used to like to party. We don’t think about that kind of stuff now. We just want to go back to Lesbos and help.”

At least 59 refugees have died or gone missing while making journeys to Europe this year, according to the International Organisation for Migration.

“These volunteers and aid workers are trying to ensure their [refugees’] safe passage … the state should be assisting them, rather than arresting them,” Nada Homsi, a Lebanon-based volunteer who worked on the island last year, told Al Jazeera.

“I’ve never seen anyone from the group do anything inappropriate or wrong, or anything that could constitute the gross charges that are being held against them.” 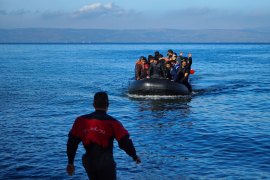 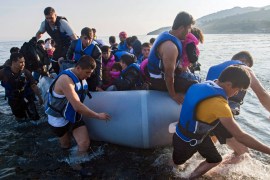 Al Jazeera spoke to refugees in Greece after the perilous Aegean Sea crossing about war and a brighter future in Europe. 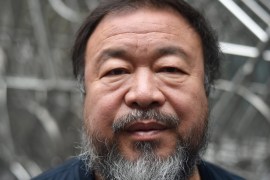