The presidential election in the Central African Republic (CAR) is now headed to a runoff later this month between two former prime ministers, election officials say.

No candidate received more than 50 percent of the vote during the first round held late last month, according to final provisional results released by the National Election Authority on Thursday.

The runoff is scheduled for January 31.

Anicet-Georges Dologuele came first with 23.8 percent of the vote, followed by another ex-prime minister, Faustin Archange Touadera with 19.4 percent.

Thursday’s results must now be certified by the transitional government’s constitutional court.

Twenty of the 30 presidential candidates had previously voiced objections and called for the count to be stopped, but nearly all of them have since reversed their position.

CAR citizens voted on December 30 in much-delayed national elections that it was hoped would bring stability after two years of ruinous communal violence.

Rebels from a mainly Muslim group called the Seleka seized power in the Christian-majority nation in early 2013, forcing former President Francois Bozize to flee and provoking reprisals from Christian militias known as the anti-Balaka.

Militia leaders have since fuelled a cycle of religious and inter-communal violence that has killed thousands and forced a fifth of the country’s five million people to flee their homes.

A transitional government came to power in 2014 after a rebel leader stepped aside less than a year after his forces overthrew the government.

Violence between Christians and Muslims in the past years has caused nearly one million people to flee their homes, and there have been fears that unrest could intensify during the election period.

The first round’s frontrunner, Dologuele, is a 58-year-old economist who spent more than a decade outside the country before returning to the political scene in 2013.

He served as prime minister from 1999 to 2001 under the government of President Ange-Felix Patasse, who was deposed in a 2003 coup by Bozize.

Touadera, who is also 58, served as prime minister under Bozize’s government from 2008 until early 2013.

He holds a doctorate in mathematics and served as vice-chancellor at the University of Bangui before becoming prime minister. 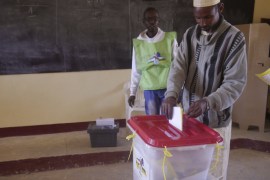 At least 20 presidential candidates demand counting of ballots stops in election that brought hopes of stability. 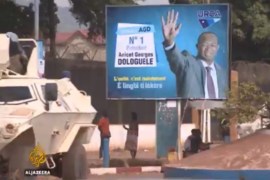 Central African Republic, what must come next

The new government will have to re-establish the Central African Republic as a functioning state within its own borders.

Thirty candidates vying for presidency in election that will test progress towards stability after years of violence.