Hillary Clinton has apologised for using a private email server while serving as secretary of state, calling the decision, which has dogged her Democratic presidential bid, a “mistake”.

The Democratic front-runner, who is facing eroding support, has long dismissed the email uproar as a manufactured imbroglio.

But in an interview on Tuesday evening, Clinton told ABC’s “World News Tonight” that she took full responsibility for the episode, which she regretted.

“That was a mistake. I’m sorry about that. I take responsibility,” she told the news network.

Clinton used her private email account and home server in lieu of the official government email system while she served as top diplomat from 2009 to 2013.

Until Tuesday, Clinton had demurred from issuing a direct apology.

“I certainly wish that I had made a different choice,” Clinton said last week, adding that she was “sorry” that the controversy was “confusing” for the public.

“As I look back at it now, even though it was allowed, I should have used two accounts, one for personal emails, one for work-related emails,” Clinton said Tuesday.

The lingering email saga has weighed on Clinton’s popularity, with a Gallup poll released on Friday showing her favourability rating at 41 percent, compared to 51 percent who view her unfavourably – the lowest level since 1992.

‘Not classified at time’

And the issue is unlikely to go away anytime soon, since the Department of State, to which Clinton turned over 30,000 official emails in late 2014, is releasing them to the public in batches.

Many contain information that has been retroactively classified, raising questions about whether Clinton was inappropriately sending and receiving highly sensitive material, and whether sufficient security measures were in place to protect her server from hackers.

Clinton “maintained that during her tenure at the state department she “did not send or receive any information that was marked classified at the time”.

She also added that “everyone” she had emailed with, including “people in the White House, of course across the state department”, knew that she was using a personal email account.

“It appeared, you know, as my address,” Clinton said.

The Federal Bureau of Investigation is examining the server to determine whether the arrangement has compromised government secrets.

Amid rising discomfort over the handling of the email fallout, Vice President Joe Biden, a fellow Democrat, has begun publicly discussing the prospect of his own White house bid.

Asked whether Biden would make a good leader, Clinton gave her reluctant support for the man with whom she worked closely during the first term of the Obama administration.

“I think he could be a good president, there’s no doubt about that,” she answered.

But she took a harsh tone when it came to Republican front-runner Donald Trump, whose ever-expanding lead atop his party’s presidential field has made him a formidable force.

“He won’t tell you how he would do anything,” Clinton said.

Americans, she maintained, “need a leader who cares about them again. So that’s what I’m going to try to do”. 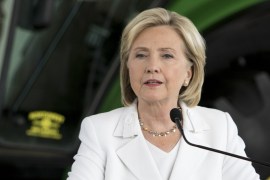 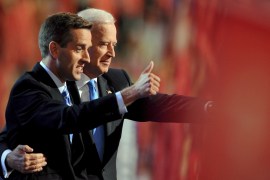 New York Times says US vice president is “actively exploring” 2016 candidacy at the urging of his son, who died in May. 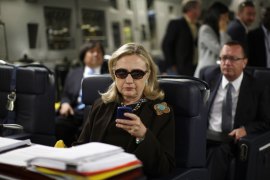