Hundreds of angry and frustrated asylum seekers have broken through police lines near Hungary’s southern border with Serbia and began marching north towards Budapest.

Crowds who had grown tired of waiting for buses at Hungary’s first refugee holding centre near the border village of Roszke on Monday tore down flimsy police tape, advanced down a country road and walked around rows of police trying to block them.

Officers offered no resistance as about half of the 500-strong crowd reached the M5 highway that connects Serbia and Hungary.

They headed north along the shoulder, raising their arms and chanting “Germany! Germany!”

Police merely walked beside them as a lone helicopter monitored the marchers’ progress north as darkness fell. The highway was blocked for nearly 50km as a precaution.

The move mirrored Friday’s surge of people from Budapest towards Austria in a traffic-snarling tactic that forced Hungary to concede defeat and bus thousands to the Austrian border.

Hungary’s Defence Minister Csaba Hende resigned after a national security council meeting was held to discuss the influx of refugees on Monday.

Prime Minister Viktor Orban, a right-winger who has pushed for a hardline on Europe’s immigration crisis, accepted Hende’s resignation on Monday and offered the job to Istvan Simicsko, also a member of his Fidesz party.

Germany’s rail company said Monday it had carried 22,000 asylum seekers over the weekend on more than 100 trains, a number boosted by the fact that Hungary again has dropped visa checks on foreigners buying train tickets for the wealthier countries to the west, particularly Germany.

After an overnight cabinet meeting, Germany said it would set aside six billion euros ($6.6bn) to boost aid for asylum seekers and hire 3,000 more federal police.

It also planned to make it easier to build refugee housing and for non-German speakers to hold jobs.

German Chancellor Angela Merkel reflected on what she called “a moving, in some parts breathtaking weekend behind us”, when Austria and Germany threw open their borders for thousands of asylum seekers trying to get out of Hungary.

She said all EU countries could help accommodate the families fleeing war and poverty.

Britain and France, seen as less generous than Germany so far, overcame reluctance and stepped up their commitments on Monday.

British Prime Minister David Cameron said his country would resettle up to 20,000 Syrians from camps in Turkey, Jordan, and Syria over the next five years.

“The whole country has been deeply moved by the heartbreaking images we have seen over the past few days,” he told the British Parliament.

“It is absolutely right that Britain should fulfil its moral responsibility to help those refugees.”

French President Francois Hollande said his country would take in 24,000 refugees over the next two years.

The United States government said it was considering a range of approaches in response to the global refugee crisis including with regard to refugee resettlement.

“We are also in regular contact with countries in the Middle East and Europe who have been greatly impacted by the increased refugee flows,” White House spokesman Peter Boogaard said in an emailed statement. 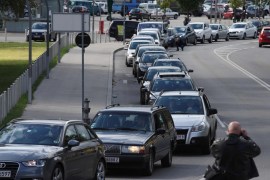 Austria and Germany open their borders to thousands of refugees who have been stranded in Hungary.