Thousands of exhausted refugees have arrived in the German city of Munich after boarding special trains from Austria’s Vienna.

The refugees, who spent the past few days trapped in Hungary, started arriving in Munich early on Saturday morning and the trains continued to arrive throughout the day.

The refugees were being taken to an accommodation centre for registration but could be sent to shelters elsewhere in Germany in coming days.

Al Jazeera’s Rob Reynolds, reporting from outside the Munich train station, said the refugees were relieved to have arrived in Germany, many with just the shirts on their backs, and had been warmly welcomed by cheering Germans.

“People here have been handing out soft toys, teddy bears for the kids, and you can see the relief on their faces that at least they have arrived safely,” our correspondent said.

Austria’s interior ministry arranged the transport to Germany after the refugees were bussed to the border by the Hungarian government, which gave up trying to stop them under pressure from the sheer numbers reaching its frontiers.

The ministry said about 4,000 people had arrived in Austria on Saturday and the number was expected to reach 10,000 by the end of the day.

Once they reached the Austrian border, the refugees, many of them from Syria, were whisked by train and shuttle bus to Vienna, where many said they still wanted to continue on to Germany.

After days of confrontation and chaos, Hungary’s government deployed the buses to take more than 1,000 refugees, including disabled people and family groups, who had set off by foot on Friday from Budapest down the main highway to Vienna.

The UN High Commissioner for Refugees (UNHCR) praised the two countries for their “political leadership based on humanitarian values”.

For days, Hungary had cancelled all trains going west to Austria and Germany, saying it is obliged under EU rules to register all asylum seekers, who should remain there until their requests are processed.

Al Jazeera’s Andrew Simmons, reporting from outside Budapest, said some people were worried the police were luring them into a trap with the buses but they were so exhausted after hours of walking that they boarded them.

Meanwhile, European foreign ministers and officials gathered in Luxembourg on Saturday to discuss the massive influx of refugees in countries across Europe. The informal meeting finished with the countries remaining deeply divided on compulsory quotas for refugee settlement.

The European Commission will meet next week to consider an expanded scheme to relocate refugees from Hungary, Greece and Italy according to quotas.

German Chancellor Angela Merkel said on Saturday she was still aiming to balance her country’s budget, despite an expected 800,000 refugees expected to arrive in Germany this year at a cost of $11bn.

Hungary has emerged as the main entry point for refugees reaching the EU by land across the Balkan Peninsula.
More than 140,000 people have been recorded entering Hungary so far this year through the EU’s external border with Serbia, where Hungary’s government is building a 3.5m wall.
Source : Al Jazeera, News Agencies 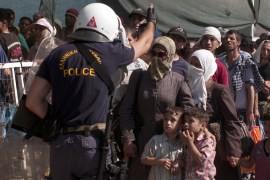 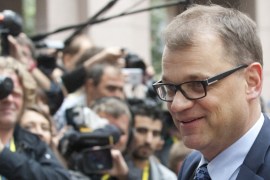