The US has conducted several air strikes with the state goal of protecting coalition troops at the airport near the key northern city of Kunduz as Afghan forces continue to battle the Taliban to retake it.

“Coalition special forces are on the ground in Kunduz advising their Afghan counterparts,” a NATO spokesman said.

The forces comprise US, British and German troops, a Western military source told AFP news agency on condition of anonymity, without specifying the number.

Heavy fighting raged inside Kunduz for a third day on Wednesday as government forces, backed by US air strikes, battled Taliban fighters who had scored one of their biggest successes in 14 years of war.

“The US conducted several air strikes in the vicinity of Kunduz airport between approximately 11:30 pm September 29th and 1:30 am September 30th against individuals threatening the force,” US Army Colonel Brian Tribus said.

Pentagon officials say the air strikes are being conducted under the rules of engagements for the NATO support mission Resolute Support which authorises air strikes to protect coalition forces on the ground, but not offensive strikes to support Afghan troops.

About 5,000 Afghan troops massed at Kunduz airport early on Wednesday after fighting there extended late into the night, an Afghan security official said, and Taliban fighters were driven back with the help a second US air strike.

Tuesday’s counteroffensive occurred as the Taliban was said to be closing in on Kunduz airport after many of the security forces had fled.

Al Jazeera’s Qais Azimy, reporting from Baghlan, just south of Kunduz, said Taliban fighters were close to the airport where machine-gun fire could reportedly be heard.

Inside Story: Can the president of Afghanistan rein in the Taliban?

“Afghan security forces and other government employees are inside. They fled to the airport, they thought it was the safest place,” he said.

Earlier on Tuesday, Afghanistan’s President Ashraf Ghani, in an address to the nation, said security forces had retaken some government buildings and that the Taliban had “sustained heavy casualties”.

Afghanistan mobilised military reinforcements to take back Kunduz, a day after Taliban fighters overran the city on Monday.

The US carried out two air strikes in support of the government on Tuesday.

In Washington, Peter Cook, Pentagon spokesperson, confirmed that “limited coalition forces” were on the ground in the Kunduz area involved in “training, advising and assisting the Afghan security forces in accordance with our resolute support mission”.

The first strike by a US plane, he said, was carried out “in order to eliminate a threat to coalition and Afghan forces in the area”.

The single bomb dropped was said to have destroyed a tank stolen by the Taliban.

Many of the Afghan security forces retreated to the outlying airport, leaving the Taliban effectively in control of Kunduz after they stormed the city, captured government buildings and freed hundreds of prisoners.

The number of dead and wounded in the fighting was unclear as overwhelmed health workers struggled to treat the injured and verify how many had died.

“We fear that many more civilians may be harmed if fighting continues over the next few days,” Zeid Raad Al Hussein, UN high commissioner for human rights, said.

He said the UN was “seeking to verify reports that at least 110 civilians were killed and injured”.

Many residents were making a hasty exit from Kunduz, some by road while others headed to the airport.

The Taliban has since said one reason for the assault on Kunduz was to prove the group was united after the appointment of Mullah Akhtar Mansoor in July angered many key figures in the group. 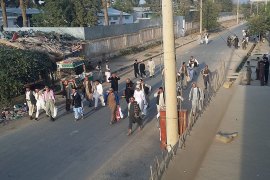 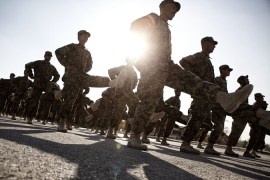