Qatar’s emir has offered to host a “meaningful dialogue” in an attempt to calm Arab-Iranian differences that underlie key conflicts in the Middle East.

Sheikh Tamim bin Hamad Al Thani told a United Nations General Assembly gathering of world leaders on Monday that there was not, in his opinion, a conflict between Shia and Sunni Muslims but instead regional political disputes between Iran and the Arab countries of the Gulf region.

The emir said his own country’s relations with Iran were “growing and evolving steadily”.

Qatar has developed a role as a meeting ground for regional negotiations. Sheikh Tamim asserted that the countries of the region were “not in need of mediation from anyone”.

Arab-Iranian tensions have been at play in the conflicts in Syria and Yemen.

In his speech to the United Nations General Assembly, Sheikh Tamim said that conflicts in the Middle East were dangerous and ongoing, and posed a real threat to international peace and security.

He described the Syrian regime as “manipulative” and said that it created a fertile ground for extremism and terrorism to flourish in Syria.

Sheikh Tamim also said there was a need to solve the Arab-Israeli conflict through ending the Israeli occupation of Palestinian territories and achieving a lasting solution to the Palestinian cause.

He stressed that this would come by establishing a Palestinian state. “But for that to take place Palestinians need to find an Israeli partner to make peace with.”

The emir also criticised the international community for ” failing to meet its own pledges and obligations” with regard to the reconstruction of Gaza “in the aftermath of the [Israeli] aggression” in the summer of 2014. 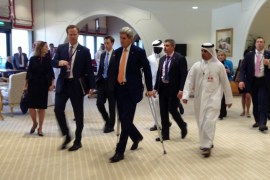 US secretary of state’s Doha visit seeks to address security concerns of Arab Gulf states about the Iran nuclear deal.