Thousands of people have marched in Mexico City to demand answers over last year’s disappearances of 43 students, piling new pressure on President Enrique Pena Nieto to clear up a case that has battered his image.

A year to the day since 43 trainee teachers went missing in the southwestern city of Iguala after clashes with local police, protesters held up banners ridiculing Pena Nieto’s response to the crisis and accusing him of trying to draw a line under it.

Signs that read: “Crime of the State” and “Get Out Pena”, peppered the crowd as they streamed down the Paseo de la Reforma, the grand boulevard that runs through the centre of the Mexican capital.

More than 8,000 took part in the march, which culminated at the historic Zocalo, a giant square in the ancient heart of the city that is the seat of the government.

“They took them from us alive, and we want them back alive!” demonstrators at the protest chanted.

A spokesman for the families, Felipe de la Cruz, told the AFP news agency: “We can’t rest in our search.”

Simmering anger over the disappearances, which exposed deep flaws in Mexico’s justice system, has dashed any hopes the president harboured of turning the spotlight away from violence and lawlessness that have plagued the country for years.

Pena Nieto’s government said the 43 young men were abducted by corrupt municipal police, then handed over to be massacred by a local drug gang that believed the students had links to a rival outfit in the impoverished state of Guerrero.

But an international team of experts reviewing the case this month questioned the government account of how the gang members incinerated, ground up, then dumped the students’ remains in a river, arguing its investigation was sloppy and full of holes.

“The people have gone back to tell the president we don’t believe him, we’re not idiots,” said Moises Acosta, 30, one of the thousands of peaceful demonstrators.

“Mexico needs to get to work on this case. It’s a lie we’re not going to swallow.”

Parents of the students this week called for a new investigation, but, as yet, the government has only offered to create a new office to look into disappearances in Mexico.

Vidulfo Rosales, a lawyer representing the families, has said they “totally reject” the creation of a special prosecutor for all of the country’s missing.

He said the case of the 43 missing students requires its own special prosecutor.

To date, Mexico has only definitively identified the remains of one of the victims.

Government officials have said the task of identifying them was complicated by the fact there was so little evidence left after their bodies were destroyed.

On Friday, the government said it would send more remains for examination by forensic experts in Innsbruck, Austria.

Prosecutors accused the mayor of Iguala and his wife of being in league with the drug gang, though they were just two among dozens of suspects arrested over the crime, which sparked international concern over the lack of law and order in Mexico.

The apparent massacre became a symbol of state incompetence and corruption, and a few weeks after the events, Pena Nieto became embroiled in a conflict-of-interest dispute over homes his wife and his finance minister bought from a government contractor.

Conflated by Pena Nieto’s critics, the two cases eroded the president’s credibility and some demonstrators on the grey afternoon used the march to attack Pena Nieto on both counts.

Pena Nieto marked the anniversary of the events in Iguala on Twitter by pledging to bring those responsible to justice. 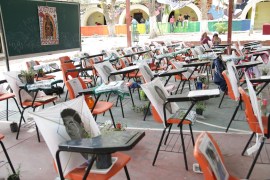 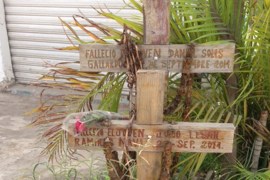 Mexico one year after the kidnapping: ‘I saw it all’

Al Jazeera speaks to a witness who watched dramatic events of September 26, 2014, when 43 students went missing.