Pope Francis, speaking at New York’s St Patrick’s Cathedral, has expressed “closeness” with the world’s Muslims after more than 700 pilgrims were killed in a stampede outside the Islamic holy city of Mecca.

Speaking during a packed evening prayer service on Thursday, the pope said he wanted to express “my sentiments of closeness in the face of the tragedy that their people suffered today in Mecca.”

“In this moment of prayer, I unite myself with you all in prayer to God, our father, all powerful and merciful.”

The Argentine pope had earlier arrived in the melting pot of New York after reminding the US of its immigrant origins in the first ever papal speech before Congress.

Over an intense 40 hours, beginning with the prayer service at St Patrick’s Cathedral, the pope will address world leaders at the UN, participate in an interfaith service at the September 11 memorial museum at Ground Zero, and celebrate mass at Madison Square Garden.

Thousands of people had lined New York’s streets on the route leading to the recently spruced up cathedral, to greet the popular pontiff. They cheered, waved flags and adoringly chanted his name.

The pope, who is making his first trip to the US, planned to visit a school on Friday and take a processional drive through Central Park.

Al Jazeera’s Hida Fouladvand, reporting from New York, said there had been a fruitful street economy underway, with individuals selling t-shirts, flags and memorabilia along the route.

Fouladvand said the thousands of people there included protesters against same-sex marriage and demonstrators, angry at the sexual abuse crisis that has rocked the church, holding placards reading: “Priests rape boys.”

Speaking to Al Jazeera, Diego Camporotondo and Daniela Batista, who came to New York from Buenos Aires, said they were devoted Catholics and had been waiting for the pope’s arrival for more than three hours.

Proudly wearing an Argentine t-shirt and holding the national flag, Camporotondo said: “The Church has a lot of problems, but the pope is changing that.

“He is humanising the church, giving the example from the top down.”

Earlier, Pope Francis had called for the global abolition of the death penalty in his address to a joint meeting of the US Congress, a first for the leader of the Catholic church.

“We are not fearful of foreigners because most of us were once foreigners. I say this to you as a son of immigrants,” the 78-year-old Argentine pope said on Thursday, addressing the issue of immigration.

Referencing the refugee crisis in Europe as well as the US’ own struggle with immigration from Latin America, Francis summoned politicians “to respond in a way which is always humane, just and fraternal.”

Later on Thursday, he joined homeless people in Washington as part of a whirlwind three-day visit to the capital, the first stop on his three-city US tour. 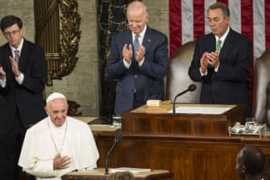