Hadi flew to the city on Tuesday for the first time since he escaped an offensive by Houthi fighters in March.

His return is the latest sign that pro-government forces, backed by a Saudi-led military coalition, have secured enough territory from the Iran-allied Houthis to resume administering at least part of the country.

A government source said Hadi would spend the Muslim Eid al-Adha holiday in the city then fly to New York to deliver a speech at the United Nations.

Hadi was greeted by Prime Minister Khaled Bahah and several ministers who had returned to Aden last week to help set up an interim administration.

An alliance of Arab states intervened in the country’s war in March with the aim of restoring Hadi, and have helped drive the Houthi forces back from Aden.

Gulf ground troops are now trying to push into Houthi strongholds in northern Yemen and in Sanaa, which the group seized a year ago. 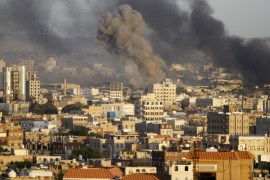