President Abdel-Fattah el-Sisi has sworn in a new government, one week after the previous Cabinet resigned amid a corruption probe, Egypt’s state news agency reported.

The country’s interior, justice, defence, finance and investment ministers, however, kept their posts.

Local media had accused the ousted Prime Minister Mehleb and his ministers of incompetence and being out of touch with the public.

Sissi, the former general and defence minister who led the overthrow of Islamist President Mohamed Morsi in 2013, was spared the media lashing.

Egypt, whose governments have long been plagued by corruption allegations, has been in turmoil since the 2011 uprising that toppled longtime autocrat Hosni Mubarak.

Prime Minister Ismail was among the most celebrated ministers in the former Cabinet, especially after Italy’s Eni SpA revealed late last month their discovery of the “largest-ever” oil field in the Mediterranean Sea off the coast of Egypt.

Sisi has also restructured the Cabinet, merging several ministries and forming a new body responsible for immigration, according to the Middle East News Agency.

Bound by the constitution, Egypt’s new government must submit its resignation once the new parliament convenes in December, following upcoming parliamentary elections.

According to local media reports, the inherently short-term nature of the current Cabinet prompted some ministerial candidates to decline offers to join.

Egypt has been without a legislature for three years. In its absence, Sisi holds legislative authority and has passed dozens of laws by decree.

Also on Saturday, Sisi appointed Mehleb to the position of “assistant to the president for national and strategic projects.”

Shortly after he accepted Mehleb’s resignation last week, Sissi said in a speech that he still “needs Mehleb by (his) side.”

Some observers have interpreted these moves as an attempt by Sisi to engineer a soft landing for Mehleb – a former construction magnate and prominent member of Mubarak’s now-defunct National Democratic Party.

“(Sisi) is protecting Mehleb from the allegations and the talks that may follow him,” pro-government television presenter Tamer Amin said, praising the president’s handling of the situation. 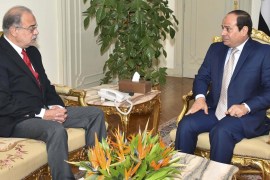 Abdel Fattah el-Sisi tells cabinet to remain in a caretaker role until a new cabinet is formed. 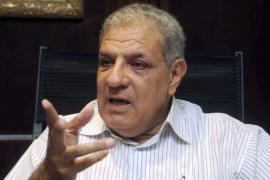 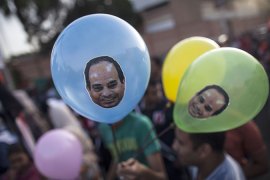 Egypt: New leader, but what’s next?

New Egyptian president says there will be no reconciliation with those who committed crimes.