Yemeni President Abd-Rabbu Mansour Hadi has backed out of the planned UN-brokered talks with Houthi rebels, his office has said.

In a statement released on Sunday, Hadi said that there would be no talks with the Houthis until they accept a UN resolution that obliged them to withdraw from areas they seized and surrender weapons taken from state institutions.

The peace negotiations were scheduled for later this week as more than five months of war have ravaged the impoverished country.

The strikes targeted arms depots and military camps in the rebel-held areas of Sanaa.

The reinforcements are being sent in preparation for an offensive to retake the capital, seized by the Shia Houthi fighters a year ago.

The United Nations estimates that Yemen’s conflict has killed more than 4,500 people since March. 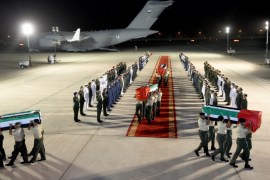 Air strikes on Marib and other places come one day after missile claims lives of 60 Gulf troops, including 45 Emiratis.