At least 38 refugees – including at least 14 children – have drowned after a wooden fishing boat sank off the Greek Island of Farmakonisi, the Greek coastguard has said.

Four babies and 10 young children – five boys and five girls – were among 112 people on the stricken boat when it sank off the southern Aegean island early on Sunday, the Athens News Agency reported.

The toll is thought to be the largest recorded from any single accident in Greek waters since the refugee crisis began.

“We have 38 dead here,” the coast guard duty officer on the island of Leros told the DPA news agency.

In an interview with Al Jazeera from Austria, UNHCR chief spokesperson Melissa Fleming also said there were 38 fatalities.

Al Jazeera’s Jonah Hull, reporting from the Greek island of Lesbos, said the accident took place before dawn. The coast guard rescued another 68 refugees from the sea and another 30 made their way to the island by themselves.

Coast guard officials said the boat may have been toppled in part because of wind gusts exceeding 50kph.

“Divers have recovered a number of victims still trapped in the vessel,” our correspondent said.

“With the rate of these small boats crossing to make this perilous journey the risk of accidents is always there,” our correspondent said.

Also on Sunday, a rubber dinghy deflated about 100m off Lesbos, forcing the occupants to swim for their lives.

Sunday’s tragedy came just a day after two other boats capsized and at least five people – four children and a 20-year-old man – were presumed drowned.

Our correpondent said the coast guard had called off a search for the bodies on Sunday.

While the pace of arrivals to the Greek Islands has not slowed, with several thousand people still arriving each day, our correspondent said there was “a glimmer of hope for the people making the perilous journey”.

“The Greek government appear to have their act together. Now the island is able to give the people who arrive here a better reception and a more speedy one,” he said.

The island of Farmakonisi lies midway between Samos and Kos, two of the favoured targets for smugglers sending thousands of migrants and refugees daily to Greek islands. 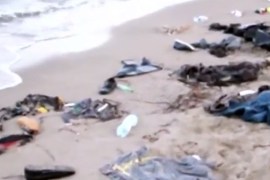 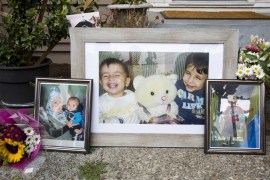