Progress has been made towards a resolution of the conflict in Ukraine, German Foreign Minister Frank-Walter Steinmeier has said after meeting his Russian, Ukrainian and French counterparts in Berlin.

Steinmeier said on Saturday that Ukraine and Russia were “less confrontational” than at previous talks and that they were closer to striking an agreement on the withdrawal of weapons from the demarcation line between separatists and Ukrainian forces in eastern Ukraine.

The warring sides also agreed not to lay any more mines and to clear mines.

“We all agreed that the new ceasefire of September 1 has been respected and now needs to be further consolidated,” Steinmeier said.

Russian Foreign Minister Sergei Lavrov for his part said differences remained on the controversial issue of holding of local elections in east Ukraine’s rebel-run areas, but “the general impression is that these differences can be overcome”.

Steinmeier said the countries agreed in principle that planned local elections in eastern Ukraine should be held on a joint legal basis and under the supervision of the Organisation for Security and Co-operation in Europe (OSCE).

Ukraine would hold regional elections on October 25. Donetsk rebels and their fellow separatists in neighbouring Luhansk have said they would hold their own votes on October 18 and November 1, respectively, drawing protests from Kiev.

The foreign ministers also agreed that further concrete steps needed to be taken urgently to ensure that there is no repeat of last winter’s humanitarian emergency this year such as by ensuring that aid agencies are able to reach people in the conflict region and by improving water provision.

The leaders of Russia, Ukraine, Germany and France are due to meet in Paris on October 2 to discuss efforts to resolve the Ukrainian conflict.

Meanwhile, Ukrainian Prime Minister Arseniy Yatsenyuk urged the West not to lift sanctions on Russia for its role in the Ukraine conflict unless the Minsk peace deal is fully implemented.

“If you send mixed signals to (President Vladimir) Putin, for example that we contemplate an idea to lift sanctions…. this is the weakness,” Yatsenyuk said at the international Yalta European Strategy conference in Kiev.

“This is the way… actually to underpin and support Putin in his aggression against Ukraine,” Yatsenyuk said in a speech in English.

Kiev and the West accuse Russia of sending regular troops and weapons to aid the separatists in the east, where nearly 8,000 people have died in the conflict since April 2014. Moscow has always denied involvement. 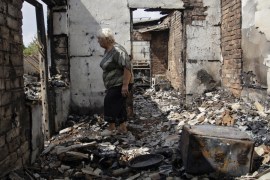 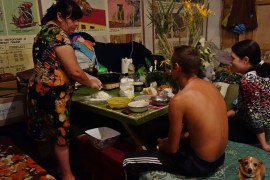