An Indian court has convicted 12 of 13 men accused of planning blasts that ripped through Mumbai commuter trains in 2006, killing more than 180 people and wounding more than 800.

Judge Yatin D Shinde on Friday found them guilty of murder and criminal conspiracy charges and said he will announce their sentences on Monday after hearing arguments from the prosecutors and defence attorneys. They face the death penalty.

One of the defendants, who was charged with harbouring assailants at his home, was acquitted by the special court, according to the private Indian news channel, NDTV.

Seven bombs went off within 15 minutes on the packed trains during the evening rush hour in the financial hub on July 11, 2006.

KP Raghuvanshi, state Anti-Terrorism Squad (ATS) chief at the time of the bombings, said that justice had been done.

“I believe that justice has been done…,” said Raghuvanshi.

The convictions announced nearly nine years after court delays prompted by accusations that the suspects were coerced into falsely confessing their involvement in the blasts.

Prosecutors alleged that the attacks were planned by Pakistan’s Directorate of Inter-Services Intelligence, or ISI, and carried out by Lashkar-e-Taiba operatives with help from the Students’ Islamic Movement of India, a banned armed organisation.

Pakistan has denied the claims. 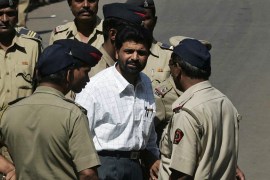 Yakub Memon hanged for role in killing of more than 250 people in Mumbai, after last minute bids for clemency rejected. 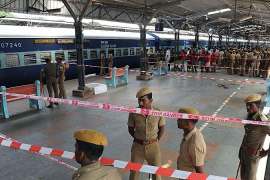 One woman killed in southern city in twin explosions despite tight security across country as it holds elections. 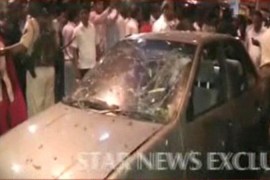 At least 19 dead and scores injured after three explosions in two parts of India’s financial capital.