The US is making plans to accept 10,000 Syrian refugees in the coming budget year, the White House has said, a significant increase from the 1,500 migrants that have been cleared to resettle in the US since civil war broke out in the Middle Eastern country more than four years ago.

In a news conference on Thursday, White House spokesman John Earnest said: “One thing that the United States can do is to begin to admit more Syrian refugees into the United States, this year, the fiscal year that ends at the end of this month.

“The United States is on track to take in about 1,500 Syrian refugees. The president has directed his team to scale up that number, next year.

“He has informed his team that he would like them to accept, at least make preparations, to accept at least 10,000 Syrian refugees in the next fiscal year.”

The Obama adminstration has been under increasing pressure to do more than just provide money to help meet the humanitarian crisis in Europe.

RELATED: Refugee crisis: Where are the Gulf countries?

“The solution here is to meet the most urgent immediate needs of Syrian refugees, to make sure that we can provide basic medical care, basic shelter, basic food and water and even some other things, like internationally run schools in these refugee camps, to try to provide for the basic needs of those Syrians that have been forced from their homes,” Earnest said.

Earnest said that about $4bn that the administration has provided to relief agencies and others is the most effective way for the US to help meet the crisis.

But he told journalists that President Barack Obama has decided that admitting more Syrian refugees next year would help boost the US response. The 2016 budget year begins on October 1.

Tens of thousands of people from war-torn countries in the Middle East and Africa have risked their lives during desperate attempts to seek safe haven in Europe.

‘Not enough to make an impact’

Human Rights First, a non-profit organisation, said on Thursday that the Obama Administration’s plans to resettle 10,000 Syrian refugees are not enough to make a significant impact on the global refugee crisis.

“The organisation urges the Obama Administration to lead a global effort to address the situation, including a commitment to resettle at least 100,000 Syrian refugees during the next fiscal year,” the group said in a statement.

“This is not leadership, it is barely a token contribution given the size and scale of the global emergency.

“The administration’s announcement that it will commit to take in at least 10,000 Syrian refugees is far too little and is only a drop in the bucket toward providing protection to the more than 4 million Syrians who have fled their country due to horrific violence and persecution,” said Human Rights First’s Eleanor Acer.

Millions of Syrian refugees have fled their country in search of security away from the civil war, where a state of armed conflict has persisted for the past five years. 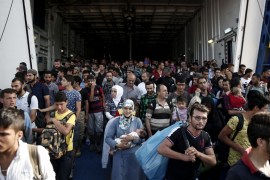 EU Commission President Juncker calls on member nations to agree on plan by next week as he unveils $2bn refugee fund.