Tens of people have been killed during a Turkish military operation in the southeastern town of Cizre since a curfew was enforced a week ago, but there are conflicting reports about who has died.

Selami Altinok, the Turkish interior minister, said on Thursday that at least 30 Kurdish fighters and one civilian had been killed in the clashes since last Friday.

However, the pro-Kurdish People’s Democratic Party (HDP) said 21 civilians had died over the same period.

Pro-Kurdish media quoted Mehmet Ali Aslan, the HDP Mardin deputy who is currently trapped in Cizre, as saying at least eight civilians were killed in attacks by Turkish forces overnight.

Selahattin Demirtas, the co-chairman of the HDP, has been leading fellow deputies and dozens of supporters on a march to Cizre to end the curfew and draw attention to the plight of its 120,000 residents.

Security forces on Thursday blocked their foot march outside the town of Idil, west of Cizre, still a few dozen kilometres from the city, the party and Turkish media said.

“It is not possible to go out and buy bread, water is coming to an end and there is no electricity,” the HDP quoted Demirtas as saying on Thursday on the road to the city.

Demitas said that the corpses of young girls and boys caught in the crossfire could not even be buried.

“They put ice on the corpses to stop them putrefying. Because burials are banned.”

The government said it launched the operation and imposed the curfew on Cizre to eliminate Kurdistan Workers Party (PKK) fighters after a string of attacks in Turkey.

Altinok said that the curfew, which is now in its seventh day, would be continued as long as required and insisted it was in line with the law.

“Once our activities [the military operation] have been completed as soon as possible, we want to lift the curfew.” 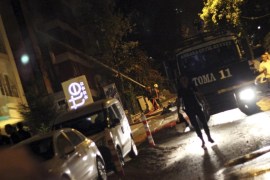 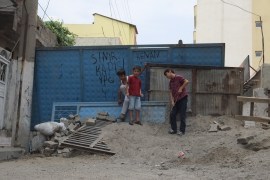