At least 54 people have been killed in clashes between the Islamic State of Iraq and the Levant (ISIL) and Syrian government forces as they battled for Deir Ezzor’s military airport, a monitoring group has reported.

The UK-based Syrian Observatory for Human Rights (SOHR) said at least 36 ISIL fighters and 18 government forces were killed during the clashes late on Wednesday.

Two children were also killed during the fighting, activists told the observatory.

During the clashes, ISIL, which has captured territory across Iraq and Syria, seized control of a small base near the regime-held military airport, SOHR said.

The seizure of the small base, used by the army’s rocket battalion, brings ISIL within little more than a kilometre of the airport.

ISIL already control most of Deir Ezzor province including more than half of its capital.

On Wednesday, the Nusra Front announced it had captured a major airbase in Idlib after a two-year siege.

The group also announced that it had killed at least 100 government forces and captured 60 others, in addition to capturing large quantities of weapons.

In a newsflash on Wednesday, state television reported that the army garrison that had controlled the military airport in the province of Idlib had evacuated the post.

The airbase in Idlib had been under siege for almost two years by rebels who have captured most of the province.

Al Jazeera spoke to a source with knowledge of the Nusra Front’s operations, who said the group had taken advantage of an ongoing sandstorm in the region to advance on the base.

“The regime couldn’t shell around the area because their planes could not shell accurately and they couldn’t see,” the source said.

“Nusra took advantage of that situation and took control of large parts of the airport.”

The source added that not all government forces had withdrawn and clashes were continuing.

The Nusra Front is part of the Fattah Army, a coalition of rebel groups which took control of Idlib city in March.

The UK-based observatory said fighters, including members of the Nusra Front, captured “most of the” base on Wednesday, including the command centre.

Obai Shahbandar, a defence analyst, told Al Jazeera that the loss of the base was a blow to the Syrian government.

“The rebel strategy seems to be to encircle the Assad regime’s forces and force them to withdraw … this was certainly a military and political embarrassment for Bashar al-Assad,” Shahbandar said.

Idlib borders Turkey, and Idlib city is the second provincial capital in the hands of anti-government forces.

Raqqa city is controlled by ISIL, which is fighting both the government and rebels, including the Nusra Front.

At least 20 civilians were killed during US-led coalition air strikes in the western suburbs of Raqqa city, the observatory reported on Wednesday.

ISIL fighters were supposed to have been in the areas bombed, but activists told the observatory ISIL forced civilians to stay in those areas. 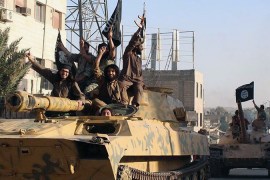 Group claims to have captured village near strategic facility in Deir Az Zor which they plan to target now. 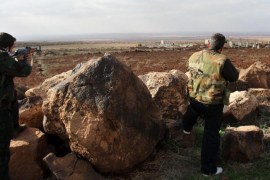 Heavy fighting persists amid reports that rebels were forced to withdraw from parts of army base a day after seizing it. 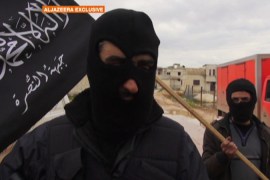 In exclusive interview, fighters explain how they seized Taftanaz, the largest military airbase in the north.