The father of the Palestinian 18-month-old baby boy who died in last week’s settler arson attack in the occupied West Bank has also died from his wounds.

Palestinians family members and relatives carried Dawabsheh’s body during his funeral on Saturday afternoon at his West Bank village of Douma near Nablus City.

The 32-year-old died in Soroka hospital, where he had been treated for second-degree burns to more than 80 percent of his body.

“His mother and brother also remain at the hospital. They both remain in very serious condition.

“In fact the mother’s condition for several days was thought to be worse than the father’s so the fact that he succumbed to his wounds raises a lot of concern about her,” Tyab said.

Early last Saturday morning, a firebomb was thrown into the family’s bedroom in a suspected settler arson attack, setting the house alight.

A funeral is expected to be held later on Saturday in Duma, where last week’s attack took place.

The Palestine Liberation Organization has said it holds Israel’s government “fully responsible” for the death of the 18-month-old baby and will lodge a complaint with the International Criminal Court (ICC).

The attack was roundly condemned around the world, including by Israeli leaders, with Prime Minister Benjamin Netanyahu ringing Palestinian President Mahmoud Abbas and saying they must fight “terrorism” together.

According to the UN, at least 120 attacks by Israeli settlers have been documented in the occupied West Bank since the beginning of 2015. 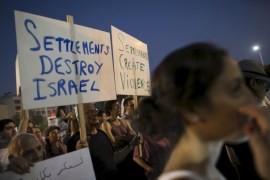 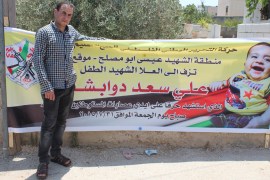