Italian police have arrested five men accused of multiple murders and human trafficking following a deadly shipwreck off the coast of Libya which left more than 200 people feared drowned.

Two Libyans, two Algerians and a Tunisian, ranging in age from 21 to 24, were placed under formal arrest on Friday in Palermo after being questioned on Thursday.

Police had earlier mistakenly identified the Tunisian as a Libyan.

Testimony revealed how the suspects had allegedly beaten and stabbed passengers during the perilous crossing, locking many people in the ship’s hold.

Police said the accused men charged the migrants between $1,200 and $1,800 for the voyage, depending on where they would be placed on the deck of the boat. Those in the hold paid about half as much as those above, they added.

The overcrowded vessel was believed to have had more than 600 migrants onboard when it began the perilous journey across the Mediterranean, before getting into trouble and overturning on Wednesday.

More than 200 others were feared lost to the waves. Police arrested the men after speaking to survivors during the night after they arrived in Palermo.

Police said “the criminals each took on a clear role,” with one in charge and the others tasked with controlling the migrants through violence.

Survivors told them migrants from Africa had been put in the hold, and that “they could be closed in and compacted in the hull for three days, having paid half price for the crossing”.

When water began seeping in, “the migrants, on the traffickers’ orders, tried desperately to get rid of it,” the police said in a statement.

When that failed, the migrants “did everything to try and get out to save themselves, but instead were attacked with knifes and sticks, pushed back into the hull,” at which point the traffickers “sealed the hatch, with the weight of the rest of the migrants, positioned on purpose to stop it reopening”.

Rescuers said they feared at least 100 people were trapped below deck when the boat overturned, and would have immediately drowned. 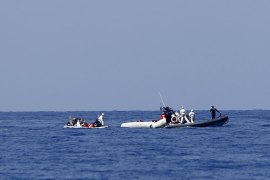 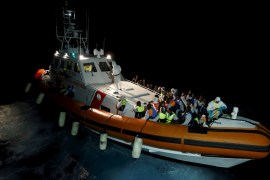 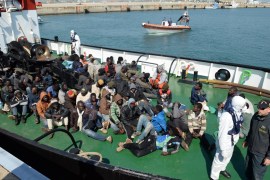 Hundreds ‘locked in hold’ of boat capsized off Libya

Reports that “hundreds” of migrants were locked in hold of sinking vessel, as calls for action on smuggling mount.