A truck bomb has killed at least 15 people and injured about 400 more in central Kabul, near an Afghan army base in the city’s District 8, police sources have told Al Jazeera.

The explosion occurred early on Friday morning, rattling nearby homes.

“Moments ago there was a car bomb in the Shah Shahid area. Civilian casualties are feared,” Deputy Interior Minister General Mohammad Ayub Salangi wrote on Twitter.

Al Jazeera’s Qais Azimy, reporting from Kabul, said: “The police suspect that the [casualty] numbers will go higher,” he said, adding that sources said that the target of the attack had been an Afghan military base.

Officials said 400 people had been wounded in the blast.

Dozens of the wounded were hurt by debris and glass shattering in the heavily populated area. Cars parked on roads in the vicinity of the blast were damaged for at least 100 metres, a witness said.

Al Jazeera’s Jennifer Glasse, reporting from Kabul, said the explosion was heard from miles around the city in the middle of the night.

“Those injured and killed were hurt by flying glass as windows shattered, buildings collapsed – the damage was very significant from this explosion,” Glasse said.

A local hospital official said their facility had been flooded with patients, including many women and children. Most were arriving on foot, the official said, and were being treated for superficial injuries.

The explosion follows a number of attacks carried out in Kabul over the past two months, all claimed by the Taliban.

A Taliban suicide bomber struck a military convoy on July 7, injuring nearby civilians.

The attack followed a Taliban car bomb attack on NATO soldiers in late June, which killed two Afghan civilians and injured 26 others, including women and children.

On June 22, the armed group launched an attack on Afghanistan’s parliament, killing five people and losing seven of its own members.

The Taliban launched its annual spring offensive in April. 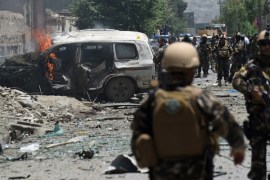 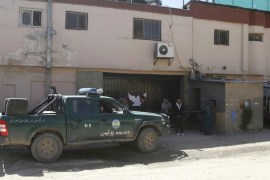