The refugee crisis in Europe is a crisis not because of the number of refugees, but because of Europe’s failure to respond to it in a coordinated fashion, the UN Refugee agency has said.

The UNHCR told Al Jazeera that more than 224,000 migrants and refugees had arrived in Europe in the first seven months of the 2015, exceeding the 219,000 that had made their way to the continent a year ago.

We also need to stop being afraid of what is happening. This is not an invasion

“In our view, European countries need to work together rather than point fingers at each other. In order to deal with this situation, Europe should open more legal ways for refugees to come,” William Spindler, senior spokesperson of the UNHCR, told Al Jazeera.

The UN’s comments come after a boat carrying hundreds of migrants capsized off the coast of Libya on Wednesday. At least 25 people were confirmed dead out of an estimated 600 people on board.

Karl Stagno-Navarra, a journalist based in Valletta, Malta, told Al Jazeera that an Irish navy vessel, the LE Niamh, confirmed that the boat capsized when those on board rushed to one side when navy ship got close to the fishing boat.

Heart-stopping footage from yesterday's @MSF_Sea rescue in the #Mediterranean pic.twitter.com/rLiZv8OzLB

The UNHCR said that even before Wednesday’s incident, more than 2,100 persons are reported to have died or gone missing in the Mediterranean Sea this year alone.

The ongoing crisis off Europe’s shores have prompted a wave of debate across Europe over migration, with each government deferring responsibility for each passing crisis.

Elsewhere in Europe, some 2,500 refugees are still stranded outside the French town of Calais, trying to get to the United Kingdom through the tunnel under the English Channel. Charities operating in the vicinity describe conditions as woeful.

“They left conditions in the country that were a situation of life and death … they risk their lives many times, and they arrive here … and they have difficulty understanding they are in France, living in a jungle with living conditions that are below international refugee camp standards,” Maya Konforti of L’Auberge des Migrants, a local migrant charity, told Al Jazeera.

Konforti added that European laws need to change and that each country needed to agree on immigration laws that would be fair to each based on wealth and population.

“We also need to stop being afraid of what is happening. This is not an invasion,” she said.

On Tuesday, the International Organisation of Migration (IOM) lamented the loss of life and said more people are expected to try and reach European shores as the summer progresses.

“It is unacceptable that in the 21st century people fleeing from conflict, persecutions, misery and land degradation must endure such terrible experiences in their home countries, not to mention en route, and then die on Europe’s doorstep,” General William Lacy Swing, the Director of IOM, said in a statement.

Libya has become infamous for people-smugglers promising passage to Europe in return for thousands of dollars. Some 90,000 migrants and refugees have arrived in Italy in 2015.

But the UN agency said that while the migrant and refugee crisis on Europe’s coastlines was deepening, it was still the developing world that bears most of the brunt of continued conflicts around the globe.

“Despite the increase in sea arrivals to Europe this year, European countries receive a relatively small share of refugees compared to other regions. Worldwide, 86 per cent of the refugees under UNHCR’s mandate live in developing countries,” Spindler from the UNHCR, said.

At the end of last year, the world’s top refugee host was Turkey, followed by Pakistan, Lebanon, Iran, Ethiopia and Jordan.

The main nationalities of sea arrivals this year in Europe are Syrians (38 percent), Eritreans (12 percent), Afghans (11 percent), Nigerians (5 percent) and Somalis (4 percent), the UNHCR said, underpinning what humanitarians have repeatedly said about most arrivals being victims of war and conflict. 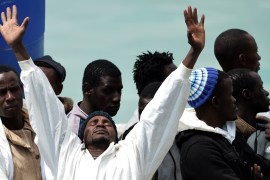 A new European Union policy on migration is now in place, but the turmoil in Libya makes it difficult to enforce. 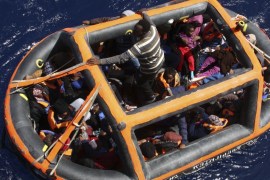 Foreign policy chief tells Security Council that people intercepted at sea will not “be sent back against their will”.