About 9,000 firefighters are battling to contain raging wildfires in California that have forced the evacuation of thousands of homes and burned more than 50,000 hectares of land, authorities say.

More than 13,000 people have been forced to flee homes threatened by the largest fire, named Rocky, Alisha Herring, spokesperson for the California Department of Forestry and Fire Protection (CALFIRE), said on Monday, three days after a state of emergency was declared over the disaster.

Rocky was sweeping through Colusa, Lake and Yolo counties north of Sacramento, the state capital.

Only 12 percent under control, Rocky has burned through more than 24,200 hectares, destroying 50 structures, about half of them homes, and threatened 6,000 more, she said.

“It’s the Rocky fire that continues to really be a fast-moving fire that definitely continue toss challenge us today,” Daniel Berlant, another CALFIRE spokesperson, said.

He said the fire ravaged through the forests at break-neck speed, with firefighters struggling to keep apace.

“Over the weekend, 20,000 acres burned in just about a five-hour period. That’s unprecedented, historic rate of spread,” he said.

Weather in the drought-stricken state was the main culprit, with several thousand dry lightning strikes reported over the weekend.

“The drought is playing a huge role. With four years of dry conditions, our vegetation, the trees, the brush, are tinder dry,” Berlant said.

The northern part of the state was the worst-hit by the fires, where forests were completely engulfed by the infernos, and several stretches of highway were forced closed.

In areas where fires had been put out, charred cars were all that was left behind on some roads, and trees were left smouldering on the blackened earth.

But Berlant said firefighters were making headway on some fronts, with at least three fires extinguished since the weekend and other almost under control.

“We are making progress on several fronts. In fact several of the fires are near containment or almost completely contained,” he said on CNN.

The firefighters managed to bring number of fires down from 21 to 18, but a new one erupted in Ventura county on Sunday and was quickly dubbed the Chorro fire, the AFP news agency has reported. 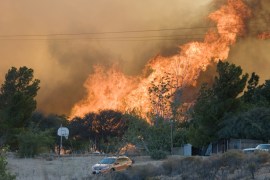 Motorist flee to safety as brush fire in Southern California foothills overruns a packed highway in a mountain pass. 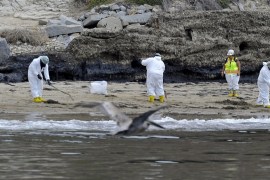