Puerto Rico has defaulted on debt by paying only a fraction of what was due August 1, showing the depth of the island’s economic and cashflow problems and potentially opening the door to broader defaults and litigation from bondholders.

The US island territory paid only $628,000 of a $58m payment due on its Public Finance Corp (PFC) bonds, a subsidiary of the Puerto Rico’s Government Development Bank (GDB).

“Due to the lack of appropriated funds for this fiscal year, the entirety of the PFC payment was not made today,” GDB head Melba Acosta said.

“This was a decision that reflects the serious concerns about the commonwealth’s liquidity in combination with the balance of obligations to our creditors and the equally important obligations to the people of Puerto Rico to ensure the essential services they deserve are maintained.”

A decade-long economic stagnation has crippled the finances of the Caribbean island. Its economic troubles has forced many thousands to emigrate to the US mainland.

Unemployment in Puerto Rico is running at 12.6 percent, more than twice that of the US.

Governor Alejandro Garcia Padilla warned in July that the government’s $72bn debt was “not payable”. Garcia has proposed restructuring the debt, a move that has been rejected by many bond holders.

The non-payment marks the first default by Puerto Rico and is the most notable since Detroit defaulted on $1.45bn of insured pension bonds before filing for bankruptcy in 2013.

Unlike cities, US states cannot file for bankruptcy while they sort out their finances. Garcia’s administration has pushed for the right for some Puerto Rico agencies to file for bankruptcy. But the US Congress has yet to agree to the move.

The White House has said that no federal bailout is planned.

Without restructuring, Puerto Rico may need to cut public services to meet its debt obligations.

A group of hedge funds has told Puerto Rico, an island of 3.5 million, to fire teachers, close schools, raise taxes, cut health spending and sell government assets, like airports and buildings, to meet its debt obligations. 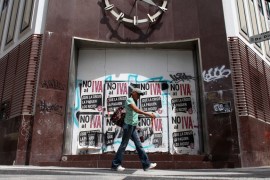 US refuses to bail out debt-laden Puerto Rico 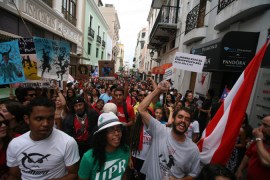 Fault Lines travels to Puerto Rico to investigate the harsh economic policies being imposed on the people there.