Government air raids in a northwestern town in Syria and a subsequent crash of a government warplane have killed at least 34 people, according to a monitoring group.

The London-based Syrian Observatory for Human Rights said it was not immediately clear how many of the dead were from the crash at a residential area in Ariha, in Idlib province, and how many from the prior bombardment.

“It was flying at a low altitude when it had a mechanical failure,” Rami Abdel Rahman, the Syrian Observatory’s head, said, citing medical officials and residents inside the town.

Abdel Rahman said at least 70 people were wounded. “Six people are still under the rubble, and we don’t know if they are alive or dead,” he said.

Residents cited by the Syrian Observatory said the plane had crashed near a vegetable market, causing “a huge blast”.

The Syrian Observatory, which relies on a wide network of activists, medics, and fighters throughout Syria, said the fate of the pilot was unknown.

The Local Coordination Committees, another activist group, said it was not immediately clear whether the plane was shot down.

The government of President Bashar al-Assad has relied heavily on its monopoly of air power in the four-year-old civil war, repeatedly bombing opposition-held towns.

It has lost a number of aircraft, some to enemy fire, some to mechanical failure.

In mid-January, at least 35 government soldiers were killed when a military aircraft crashed in Idlib.

The province has since been largely overrun by an anti-government alliance including al-Qaeda’s Syria affiliate, the Nusra Front, which seized Ariha on May 28.

The Nusra Front said on Friday it had captured “moderate” fighters who had received training from the US.

The group also accused the US of recruiting forces from what it calls “the moderate opposition” to undergo a training and rehabilitation programme run by the CIA.

The latest developments come amid a US announcement that it plans to provide, together with Turkey, air cover for Syrian fighters.

US officials, first quoted by the Wall Street Journal newspaper, said the US would provide offensive strikes to support advances against Islamic State in Iraq and the Levant (ISIL) targets.

The US would also provide defensive support to repel any attackers.

Head to Head: Who is to blame for the rise of ISIL?

US officials have long played down the idea that Assad’s forces – which have not fired on US-led coalition aircraft bombing ISIL targets in Syria – would turn their sights on the US-backed Syrian fighters.

But they cannot rule out the possibility, perhaps in an unintentional clash.

The Pentagon and the White House declined to discuss the decision on rules of engagement or confirm comments by the unnamed US officials.

Syria’s civil war began in March 2011. Ban Ki-moon, the UN secretary-general, said last week that at least 250,000 Syrians have been killed in the conflict so far, which has also led to a massive refugee crisis in the region. 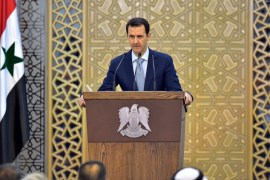 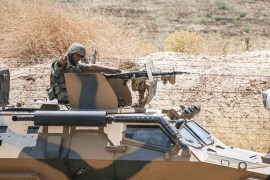