Thai police who offered an $84,000 reward for tips leading to arrests over the Bangkok bombing earlier this month have handed the cash to themselves.

Officers arrested a suspect on Saturday over the August 17 bombing at the Erawan Shrine, which killed 20 people and injured more than 120, though the man has not been charged,

National police chief Somyot Poompanmoung made the announcement of the reward at a news conference on Monday, saying he had “good news.”

Somyot said he was taking the unusual step of redirecting the three million baht reward to highlight that Thailand’s police are good at their jobs.

“Give me the bag,” he said, turning to an aide who rushed over with stacks of cash that Somyot placed on the podium before him.

“This is real money,” the police chief said with a smile. He went on to say that Saturday’s arrest was thanks to “good police work” and had not come from any outside tips.

“It is the ability of Thai officials that led to the arrest,” he said. “This money should be given to officials who did their job.”

Somyot said that at least 10 people, including both Thai and foreigner nationals, were involved in the deadly Bangkok attack, as police said they were seeking two new suspects in the case.

Officers released a photo of a Thai woman identified as 26-year-old Wanna Suansun and a sketch of a foreign man of unknown nationality.

On Monday, polce raided a second location in the capital city’s outskirts and widened their search for more suspects a day after the arrest of the foreigner, and the discovery of stacks of fake passports and bomb-making materials at a Bangkok apartment block.

Police had been searching for a prime suspect, described as a foreign man, who was wearing a yellow T-shirt and was captured on security cameras leaving a bag at the shrine moments before the blast.

Officers have responded equivocally when asked whether the man is the main bombing suspect.

“He is a man in the network,” Somyot said.

The decision over the reward quickly added to criticism on social media over the police’s handling of the bombing investigation.

Many Thais have expressed doubt that the bombing will be solved, citing a reputation Thai police have for corruption and forcing confessions.

Within days of the blast, Somyot had said he was offering a one million baht ($28,000) reward to help find the perpetrators.

The sum quickly tripled after he said two of his friends who wished to remain nameless had chipped in two million baht ($56,000) more.

Somyot said he hoped that turning the reward over to police would help motivate them and show “that higher ranking officers actually give them money”.

Last week, police said they were not ready to exclude any possibility about who was behind the attack.

Buddhist monks lead prayers at popular tourist site in Thai capital where a bomb killed at least 20 people on Monday. 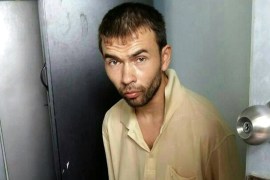