An Australian prison on the Pacific island of Nauru is inadequate and unsafe, according to a Senate committee report which called for the government to remove children from the facility.

Submissions to the committee’s inquiry, which the government has dismissed as a political “stunt”, have included allegations of rape and other abuse at the prison which is funded by Australia.

Australia has been under pressure over its hardline asylum-seeker policies under which those arriving on people-smuggling boats are transferred to prisons on Nauru and Papua New Guinea (PNG).

However, in its report, the committee said it was not its task to examine the country’s asylum policies.

“The committee is nevertheless of the overall view that the present conditions and circumstances at the Regional Processing Centre [RPC] on Nauru are not adequate, appropriate or safe for the asylum seekers detained there,” the report stated.

The committee urged the government on Monday to make tangible improvements to living conditions at the prison, which is home to more than 630 asylum seekers, saying it could not abdicate responsibility to another country or to contractors.

“The government should develop a plan for the removal of children from the Nauru RPC as soon as possible, with their families where they have them, to appropriate arrangements in the community,” it said.

The report said that all allegations of misconduct and abuse must be independently investigated and it also called for reasonable media access to the prison on Nauru.

A dissenting report by government senators said that the majority of members on the committee, in which the opposition Labor Party and Greens outnumbered the government, had been “willing to accept untested and unsubstantiated submissions as fact”.

The government was already implementing the recommendations of a review released in March and had taken steps to improve child protection for those minors in detention, they said.

The UN High Commissioner for Refugees last year slammed the facilities on PNG’s Manus Island and Nauru, saying they failed to meet international standards and amounted to arbitrary detention in breach of international law. 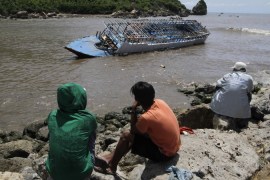 Hundreds of asylum-seekers on hunger strike at Australian immigration centre with many resorting to self-harm.