Egypt’s foreign ministry has summoned the British ambassador over comments he made on a court’s decision to hand down prison sentences for three Al Jazeera journalists, state television has reported.

Speaking in Arabic after the verdict, John Casson said he was concerned the sentencings could “undermine confidence in the basis of Egypt’s stability, both in Egypt and abroad”.

The comments were posted on the British embassy’s Facebook page.

Ahmed Abu Zeid, a spokesperson for the ministry, tweeted on Sunday that the ministry rejected any foreign criticism of the legal system, calling them an “unacceptable intrusion” in the country’s judiciary.

He also said the latest verdicts were “unrelated to freedom of the press but rather to specific, documented legal violations”.

Several other foreign diplomats at the trial also condemned the verdict, but Casson may have been the only one to speak in Arabic to domestic television stations, the AP news agency reported.

Meanwhile on Saturday, Britain’s minister for the Middle East and North Africa , Tobias Ellwood, said he was “deeply concerned by the sentences”.

Ellwood said that the “sentences will undermine confidence in Egypt’s progress towards strong long-term stability based on implementing the rights granted by the Egyptian constitution”.

Speaking from Sydney on Saturday, Greste said he was “shocked” by the court’s decision and that the verdicts were “unjust” and “unethical”.

“We will do everything we can to fight the verdict to clear our names. We are not terrorists. We did not collude with any organisation. We did not broadcast any false news,” Greste said.

Greste called on Egyptian President Abdel Fattah el-Sisi to pardon the journalists and said the president “now has an opportunity to undo that injustice”.

Trying to do their jobs

The European Union said the verdict was “a setback for freedom of expression in Egypt”.

Al Jazeera has said it plans to file an appeal before the Court of Cassation.

Lynne Yelich, the Canadian minister of state for foreign and consular affairs, issued a statement after the verdict calling on Egyptian authorities to release Fahmy. 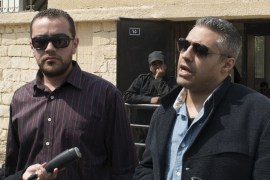 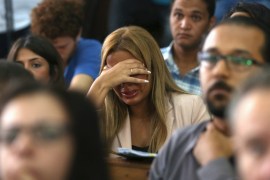 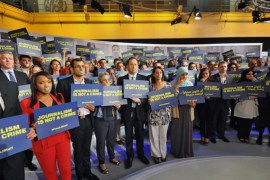