Three fighters have been killed after the Philippine military launched a second attempt in two weeks to rescue
hostages held by the Abu Sayyaf group, the army has said.

About 300 Abu Sayyaf fighters retreated after the hour-long firefight in the jungles of the remote southern island of Jolo on Friday, said Brigadier-General Alan Arrojado, the military commander in the area.

However, the military did not say if any of the hostages were freed or injured in the clashes, or how many hostages were believed to have been held at the rebel camp.

Ten Philippine soldiers were wounded in the fighting, Arrojado added.

“The bandits positioned their hostages in the back [of the group’s camp], they don’t want another escape,” Captain Antonio Bulao, a military spokesman in Jolo, told the AFP news agency.

The fighters have since split into smaller groups, each holding some hostages, Bulao added.

The military rescue attempt came after the decapitated remains of a 12th hostage, Rodolfo Boligao, were found on a deserted Jolo highway.

Impoverished Jolo is a known stronghold of Abu Sayyaf, a loose band of several hundred armed men set up in the 1990s, with seed money from the al-Qaeda network of Osama Bin Laden.

The group engages in kidnappings to finance operations, often targeting foreigners and sometimes beheading captives if ransoms are not paid.

It has also been blamed for the worst bomb attacks in the country, including the firebombing of a ferry off Manila Bay in 2004 that killed more than 100 people. 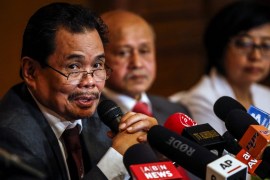 Both sides appeal to keep peace process on track amid public outrage following killings of 44 police officers by rebels. 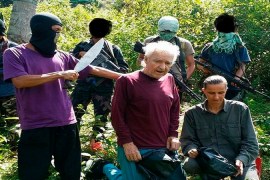 Philippines: Abu Sayyaf back in the spotlight