Guatemala’s Supreme Court has taken the first step in allowing impeachment proceedings against President Otto Perez Molina, while his former vice president Roxana Baldetti has been ordered to remain in jail pending trial in a corruption case that has pushed the country into a political crisis.

Since Friday, five of Perez Molina’s 13 cabinet ministers have resigned, as well as eight vice-ministers, two secretaries and other government officials, amid protests demanding that Perez Molina quit.

Judge Miguel Angel Galvez said on Wednesday that he considered it “prudent” to deny bail to Baldetti, whom prosecutors and a special UN investigative commission accuse of masterminding a customs bribery ring along with Perez Molina.

The decision came a day after the court approved a motion by the attorney general that could potentially see Congress strip Perez Molina of immunity from prosecution.

Analysts have voiced hope that the moves could significantly help tackle fraud in the impoverished country.

“It’s very exciting in some ways for those who forever have been deeply concerned about corruption and the elite political class that pillages the state,” said Eric Olson, a Central America expert.

“They got their hands caught in the cookie jar this time, and it’s pretty bad.”

Baldetti faces charges of conspiracy, customs fraud and bribery, based on allegations that she accepted $3.7m in bribes as part of the customs scandal that forced her from office.

Prosecutors and the UN International Commission against Impunity in Guatemala requested the removal of the president’s immunity based on allegations that he too is linked to the network of officials and individuals who received bribes from businessmen to evade import duties.

The UN impunity commission was set up in recent years to probe criminal networks because Guatemala’s judicial system was seen as too weak and fraud-prone to handle high-level investigations.

It has since helped expose high-level corruption, fueling popular outrage and street protests that have put unprecedented pressure on Guatemala’s political elite.

According to the commission, there are strong indications that the president was tied to the criminal ring known as “La Linea,” or “The Line,” the fraud operation allegedly led by Baldetti’s aide, Juan Carlos Monzon Rojas, who is currently a fugitive.

“He’s [Perez Molina] in a very weak position, not only because of the scandal but for the resignation of his ministers,” said Gavin Strong, an analyst.

“He knows it’s going to be very difficult to fight the accusations. He’s going to have to think about how he’s going to stay out of jail.”

Molina rejected the possibility of resigning in a televised speech on Sunday, and has denied involvement in the scandal.

In the case of the former vice president, prosecutors argued on Tuesday that Baldetti was one of the main benefactors of the ring, in part based on some 88,000 wiretaps and documents revealing how the money was divided.

Her defense lawyer, Mario Cano, called the charges political and said none of the wiretaps carried her voice.

Tensions are mounting ahead of September 6 elections, which are to elect Perez Molina’s successor.

Protesters blocked intersections and pledged more demonstrations in coming days, some setting off fireworks to celebrate the two rulings against the country’s two top politicians.

Farm leader Carlos Barrientos said road blockades may be erected in about two dozen points around the country.

Some protesters are demanding the elections be postponed until the corruption scandal is resolved and Perez Molina resigns. 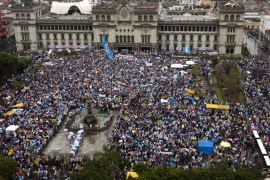