Yemen’s exiled government has declared Taiz a “disaster area” and urged the international community and the UN Security Council to intervene to stop the bloodshed.

“The government will present a letter to the Security Council in New York and the High Commissioner for Human Rights in Geneva,” Human Rights Minister Ezzeldin al-Asbahi said in a statement reported by a Yemeni news agency.

The city, Yemen’s third largest, has since April been ravaged by fighting between Houthi rebels on one side and government loyalists backed by Saudi-led air strikes on the other.

Rockets fired by the Houthi rebels killed at least 14 civilians on Monday, residents said, as fighting intensified for control of the city.

The coalition launched air raids on military bases and Houthi positions during the fighting, residents said, but no casualties were reported.

RELATED: Yemen at war – ‘No side is willing to capitulate’

“The situation is awful and the fighting is happening on many fronts. All the hospitals have closed except for one, so there’s a shortage of medical care,” Taiz resident Abdul Aziz Mohammed told Reuters news agency.

He said two rockets killed 14 people, among them women and children .

“Taiz is being devastated.”

The World Health Organization (WHO) said on Monday it was coordinating a rapid response to provide emergency health access to the injured due to the growing humanitarian crisis in Taiz and Hodeida, saying there were more than 350 casualties reported in Taiz in the past week alone.

Coalition raids on Friday killed 65 people in Taiz, most of them civilians, aid group Doctors Without Borders (MSF) said.

On Tuesday, the Saudi military said three Saudi soldiers had been killed and three others wounded along the Yemeni border in fighting or by rocket fire and artillery shelling from the Houthis.

Several dozen Saudi soldiers have been killed in border attacks since the air strikes began in March, mostly by missiles launched by the Houthis and their allies.

IN PICTURES: Displaced residents struggle as Yemen’s war grinds on

Arab countries intervened in the conflict to halt a Houthi advance into the south which prompted President Abd-Rabbu Mansour Hadi’s government to flee to Riyadh from its refuge in the southern port of Aden.

Months of air strikes and arms deliveries by Gulf states to government loyalists began to pay off last month, when they seized back Aden and made gains toward Yemen’s north and Sanaa.

The UN is working to broker a political compromise to end the civil war which has killed more than 4,300 people. 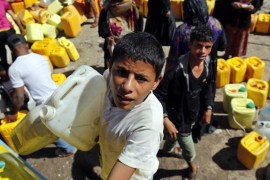