After a very slow start to the Atlantic hurricane season, which officially runs from June until the end of November, there are signs of increasing activity.

Just three named storms had formed until last week: Ana, Bill and Claudette. Then along came the first hurricane of the season, Danny.

This was an interesting hurricane, insofar as its hurricane-force winds extended a mere 15km from the centre.

This made Danny one of the smallest hurricanes on record. Yet, despite its small size, Danny packed quite a punch.

Its winds reached in excess of 180km/h making it a Category 3 (major) hurricane on the five point Saffir-Simpson scale.

Danny was the first hurricane in the Atlantic since Gonzalo in October last year and the first major hurricane since Julia in 2010.

Fortunately, Danny has fallen victim to the same atmospheric conditions which have conspired to make this the ‘quiet’ season that was so widely predicted even before it began.

The prime reason for the lack of storm activity is the El Nino in the equatorial Pacific. The warming of the surface waters here has a knock-on effect around the globe.

For the Atlantic region this takes the form of enhanced wind shear, a change of wind speed and direction with height. This helps to disrupt the development of tropical storms.

In a typical season there are nine named storms; at almost the halfway point of 2015 we have seen just four.

We would expect to see between five and six of these storms to develop into fully fledged hurricanes. Instead, we have had only Danny.

Danny is currently over the Leeward Islands and is expected to track just to the south of the islands of Puerto Rico and Dominica. Strong winds and flooding rain are likely across these islands.

Although Danny is expected to weaken into a tropical depression, it could gather strength in the western Caribbean, feeding off high sea surface temperatures of 28c to 29C.

Meanwhile, a series of storms across West Africa is pushing a ‘wave train’ out into the western equatorial Atlantic.

One such wave near the Cape Verde islands stands a low chance of developing into a tropical cyclone within the next five days or so.

In the mid-Atlantic, in a position similar to where Danny first formed, there is another area of showers and thunderstorms which, according the US National Hurricane Centre, stands a 90 percent chance of forming into a cyclone in the next five days.

The next few weeks could prove very interesting, meteorologically, across the Atlantic and Caribbean. 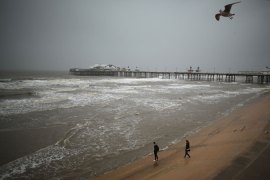 The remains of Hurricane Gonzalo slam the UK

After battering Bermuda, the storm is now turning its attention to the British Isles. 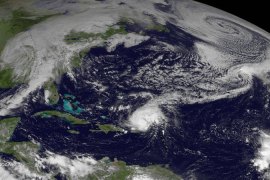 Hurricane Gonzalo has Bermuda in its sights

The most powerful Atlantic hurricane in four years is heading towards the tiny island state in the mid Atlantic. 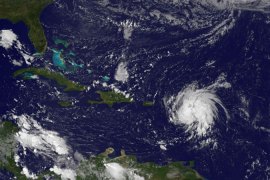 Puerto Rico and the Virgin Islands feel the full force of the storm. 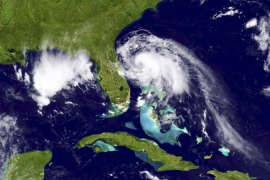 2014 has been the least active storm season in the region for more than a quarter of a century.