It is hidden away from Rafah’s busy streets, but inside, hundreds of colourful birds in cages tweet loudly – almost drowning out the sound of children playing in a pool nearby.

Opened in the late 1990s by the Jumaa family, Rafah Zoo was the first amusement and leisure park for communities in the Gaza Strip.

Jihad Jumaa, a zookeeper and son of the zoo’s owner, told Al Jazeera that his father’s original mission had been to provide a place for Gaza’s families – small children, especially – to relax and enjoy themselves.

Now 25 years old, Jumaa grew up with baboons, gazelles, snakes and lions roaming around his backyard. The zoo consists of just a few hundred square metres, located on land the family owns next to their home.

“People loved this place because it was unique and they spent a lot of time here. No one wanted to leave,” Jumaa said. “When we opened the zoo, it was the only one in Gaza. But after a few years, more opened. Now there are five or seven zoos.”

Competition from new zoos and amusement parks, combined with the ongoing Israeli blockade of Gaza and the closure of smuggling tunnels into Egypt, has made it impossible for Rafah Zoo to run a profitable business amid a rapidly deteriorating economic situation.

With 80 to 100 visitors a week, the monthly income does not come close to covering the monthly operating costs of around $3,000 for food, clean water and fuel for the generator needed, given Gaza’s frequent power cuts.

“Today, our expenses are not covered,” Jumaa said.

Gaza is not an easy place to run a business – and an even more difficult place to run a zoo. Birds lay dead on the bottom of their cages. In the middle of the park, an ostrich, which has lost most of its feathers, is too sick to stand up.

The sound of an Israeli F-16 jet buzzing in the sky serves as a reminder of the extraordinary difficulties of running a zoo in the volatile area.

The zoo employs several workers, but is mostly maintained by family members.

Rafah Zoo is not alone in facing such challenges. Earlier this year, a team of veterinarians from the animal welfare organisation, Four Paws, cited horrendous conditions at the Khan Younis Zoo in the central Gaza Strip.

Without money to pay zookeepers, the zoo was falling into disrepair. Cages were full of waste and debris, and animals that had gone without access to food or water died of starvation.

“The Khan Younis Zoo has been classified as the worst zoo in the world, as the animals, which had starved and died, had been stuffed and put back in the cages,” Amir Khalil of Four Paws told Al Jazeera.

In September 2014, just after the Israeli war on Gaza, Four Paws carried out an emergency operation to evacuate three lions from the severely shell-damaged al-Bisan Zoo in northern Gaza.

Located just a few kilometres from the Israeli and Egyptian borders, Rafah Zoo has also come under attack several times. The area was flattened in 2004, when Israeli tanks demolished large parts of the neighbourhood. Many of the animals were killed, and the family spent the next 10 years rebuilding it from scratch, collecting new animals smuggled from Egypt.

Last summer, during the 51-day Gaza war, the zoo experienced another blow.

As Jumaa and his brother were giving water to the zoo’s cats, the surrounding area was hit by Israeli rockets. The young men were badly injured, and the zoo’s tiger, kangaroo, raccoon, baboon and several jaguars were killed.

Faced with another round of expenses estimated at $700,000, the family has started to look for alternative solutions to keep the zoo afloat.

“We decided to sell the lion cubs because we needed money,” Jumaa said.

For years, a local fan of the zoo from the nearby al-Shabora refugee camp, 54-year-old Saad Jamal, had been asking to buy Rafah Zoo’s next batch of lion cubs.

“I’ve always loved lions,” Jamal told Al Jazeera during one of his frequent visits to the zoo.

The cubs, Max and Mona, were two months old when Jamal purchased them and took them home.

“I made a room for them with beds and toys and with an opening to the rest of the apartment so they got used to the place,” Jamal said. “They’d join us when we watched TV and played with my grandchildren – the youngest, who is two, would put her finger in their mouths and they wouldn’t bite.”

Images of the cubs lying in Jamal’s living room and playing with the children of the refugee camp went viral, launching the zoo and Jamal to international fame. Some expressed support, while Four Paws condemned the decision, saying it threatened both the welfare of the lions and the humans around them.

In June, Jamal decided that the cubs had become too big for his house, and temporarily returned them to Rafah Zoo. Jamal and his son still visited the cubs regularly, taking them out of their cage and letting them roam the premises. Curious families would ask to take photos with the cubs.

Jamal had been planning to move Max and Mona to a larger cage he was building in a public park, but later gave in to pressure from Four Paws and allowed them to take the young lions to a sanctuary in Jordan.

“The economic situation is very difficult, and the zoo needs help from associations that care for animals in the form of medicine and food,” Jamal said. “But it’s important to keep the zoos running for the children who suffered during the war. If we allow the idea of another war to stop us, there will be no place for entertainment in Gaza.”

Khalil, who represented the Four Paws delegation to Gaza, said there were still around 45 lions in Gaza – and the number has been growing.

It's our source of life. I was raised here and will continue to work and fight to keep it open.

As none of the zoos are able to properly care for the big cats and other animals, the organisation is working on a solution.

“Our suggestion is to close all the zoos and make one public park of proper standards – a place where kids and families can visit in Gaza,” he said. “We offered to the responsible authorities that if they offer the land, we can realise a better place for the animals, including training for the staff.”

This would improve the local economy, he said, because it would include buying food for the animals locally and employing staff and caretakers.

But due to the political instability and the fact that thousands of Palestinians in Gaza are still without proper housing, Khalil believes zoos are not a priority for the authorities.

Palestinian Land Authority official Ibrahim Radwan said the government would be ready to look into such a proposal if it came through the proper channels.

“Despite the circumstances, it is important for cultural purposes to provide information to [people], especially students, about animals,” Radwan told Al Jazeera.

In Rafah, Jumaa admitted that the situation is difficult, but said the idea of closing the zoo or giving up the animals is unthinkable.

“It’s our source of life,” he said. “I was raised here and will continue to work and fight to keep it open.” 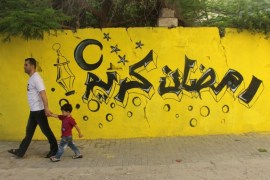 In one Gaza neighbourhood, a bit of colour prevails

In an unconventional response to the trauma of war, one Gaza neighbourhood has been transformed with colour.