Top aides to the leaders of North and South Korea have resumed talks after negotiating through the night in a bid to ease tensions involving an exchange of artillery fire that brought the peninsula to the brink of armed conflict.

The talks started at 3.30pm local time (06:30 GMT) on Sunday, after a 10-hour meeting adjourned at 4.15am, the South Korean president’s office reported. Talks continue as of 1100 GMT with no indication of when the talks will end.

Al Jazeera’s Harry Fawcett, reporting from Paju near the South Korean border with the North, said that while talks continue, “it is hard to see how much common ground” the two countries can find to end the tension.

The rivals, who are trying to defuse mounting tensions, began meeting in the border village of Panmunjom on Saturday night.

Hwang is considered by outside analysts to be North Korea’s second most important official after its leader Kim Jong Un.

The meeting follows a Saturday deadline set by North Korea demanding that South Korea dismantle loudspeakers broadcasting anti-North Korean propaganda at the countries’ border or it would initiate military action.

South Korea said it would continue its broadcasts until North Korea apologised for an incident earlier this month in which two South Korean soldiers were seriously injured in a landmine explosion in the southern part of the demilitarised zone.

In response to the landmine, South Korea restarted using loudspeakers for anti-Pyongyang propaganda, and the North responded in kind.

The dispute escalated on Thursday when North Korea shelled a South Korean military unit on the western section of the inter-Korean border, a move which the South’s military retaliated.

Then on Friday, North Korea declared its front-line troops were in full war readiness and prepared to go to battle if Seoul refused to back down.

The South ordered the evacuation of thousands of residents along the border ahead of North Korea’s Saturday deadline.

Al Jazeera’s Fawcett said that while both militaries remained on high alert, the resumption of talks was “an encouraging sign, especially as these are very senior people involved”.

He said that South Korea continued to broadcast from its loudspeakers as the talks went on.

On Saturday, North Korean media reportedly said more than one million young people had volunteered to join or rejoin the military to defend their country should a conflict break out with their southern rival.

The AP news agency reported that people in Pyongyang were going about their daily routines as normal. 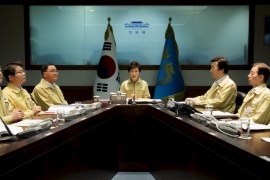 North Korea leader orders army to be ready for war 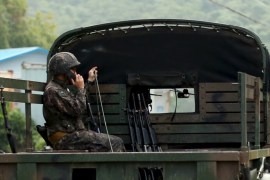 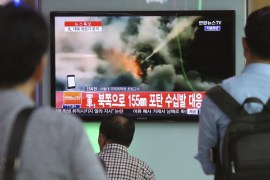