Italy’s coastguard says authorities have rescued about 4,400 refugees who were stranded in overcrowded and rickety vessels in the Mediterranean after receiving distress calls from 20 boats drifting in waters off the Libyan coast.

One of the biggest single-day rescue operations to date in the Mediterranean Sea reportedly occurred on Saturday, the Italian navy said.

The rescued refugees included a group of 311, including a new-born baby, who were picked up by a boat belonging to the humanitarian group Doctors Without Borders. The boat is expected to dock on Monday in Vibo Valentia in Calabria, according to port authorities.

A further 370 had been picked up by the Italian customs police and were headed for Messina in Sicily.

No casualties have been reported in the rescues.

Al Jazeera’s Claudio Lavanga, reporting from the town of Scilla in Calabria, said that 14 of the vessels used by the refugees were rubber dinghies.

“This is not the first time we have seen so many vessels carrying refugees being rescued at the same time. It is clearly a tactic by human smugglers who wait for good weather and sea conditions before they send out as many boats as they can,” he said.

Despite the favourable conditions for the rescue operation, it is still a very dangerous situation, he added.

“As we have seen in the past, many migrants die or risk their lives just as they see their rescuers approach them,” he said.

In a separate development, police in the Sicilian town of Palermo announced on Saturday that they arrested six Egyptian nationals on suspicion of people smuggling following the rescue of a stricken boat on August 19.

Testimony from the 432 people on board suggest the vessel had been packed with more than 10 times the number of people it was designed for, with many of the passengers, including a number of women and children, locked below decks.

More than 170,000 migrants and refugees from Africa, the Middle East and South Asia had landed at Italy’s southern ports in 2014 after being rescued in the Mediterranean, while the total for 2015 so far has already topped 104,000. Another 135,000 or more have landed in Greece since January.

Thousands of refugees and migrants have died at sea while trying to reach Europe. 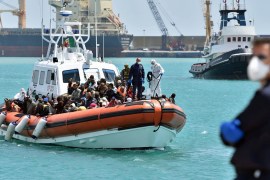 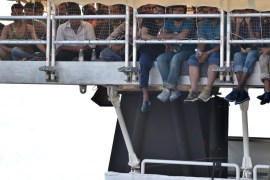 Nearly 3,000 saved by European authorities as flow of migrants across Mediterranean continues unabated.