Thousands have gathered in Beirut a day after police fired tear gas, rubber bullets and water cannons at demonstrators who were protesting against what they call Lebanon’s “political dysfunction”.

In a televised address on Sunday morning, Salam said members of the security forces will be held accountable for the violence against protesters . Salam also called on an emergency parliament session on Thursday to deal with the country’s ongoing political crisis.

“I have been, like many other fellow Lebanese, patient enough, but yesterday’s outcry should not be ignored,” he said.

“I was never in this for a position in government, I am one of you. I am with the people. Do not pit this conflict [as] one camp against the other. Target all the politicians.”

Angered by Salam’s speech on Sunday, a number of the protesters chanted: “The people want the fall of the regime”.

“This is very much a grassroots movement that has come out on to the streets…there seems to be a very significant movement forming here in Beirut.

“(The protests) were triggered by the trash crisis but the people we’ve been speaking to say that this is the straw that broke the camel’s back…they point to power shortages, water shortages, inherent corruption within the state.”

Tensions in Lebanon have peaked recently after protests against the government’s inability to ensure that rubbish is disposed of effectively.

Last month the country was left with mounting piles of rubbish after politicians, divided by regional and local conflict, were unable to agree where to dump the capital’s refuse.

The crisis was temporarily resolved when the rubbish was finally cleared, but bickering within the government over which company to award the new contract has exposed it to allegations of corruption from opponents.

The prime minister said on Sunday that if legislators could not reach an agreement on the rubbish crisis on Thursday, there is a possibility the government will be dissolved.

“If the meeting is not productive, there is no need for the council of ministers all together,” Salam said.

An online group named “You Stink!” along with other civil society groups organised this weekend’s protests, calling on Lebanese people to join them in a revolt against what they call “a corrupt system”.

Azza El Masri, who is part of the “You Stink” campaign told Al Jazeera that protesters are not backing down and the protests will continue.

“We want Tammam Salam and all the political class to resign. When people were chanting that they wanted to topple the regime yesterday, they were serious. We want to topple [the government], and we won’t stop until we do,” El Masri said.

” YouReek  or  YouStink  [protesters] have vowed to stay at Riad al-Solh until the Minister of Environment resigns, until those who were randomly arrested are freed, and until the riot police are held accountable for the violence,” El Masri added.

Joey Ayoub, one of the organisers of “You Stink” and was present during the protests on Saturday and Sunday, told Al Jazeera protesters were met with police brutality, tear gas canisters and water cannons.

“As one of those who helped organise this protest, I can safely tell you that the government’s reaction was beyond anything we were expecting,” Ayoub told Al Jazeera.

The Lebanese Red Cross said at least 15 civilians were injured during the protests on Saturday in addition to 35 officers. 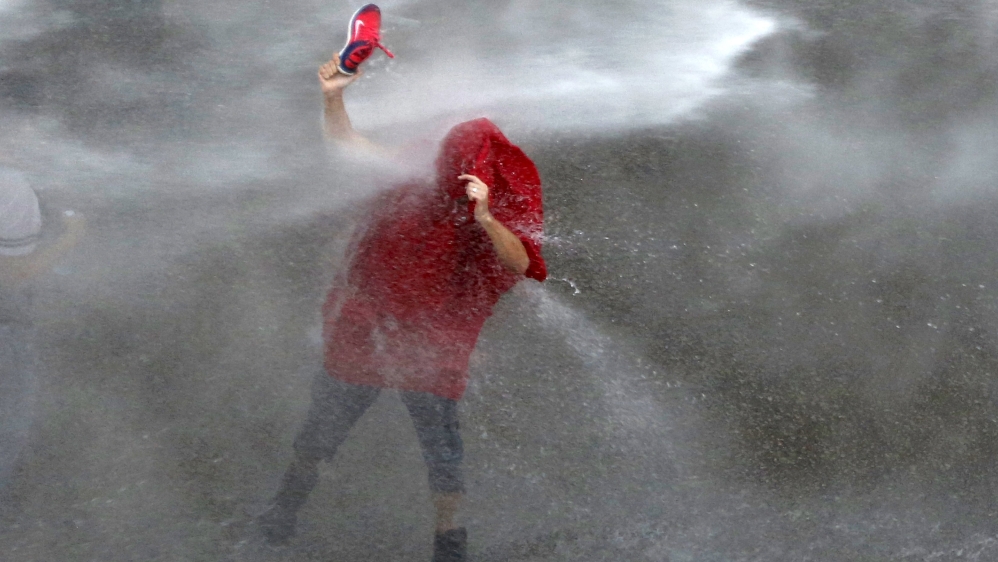