The son of ousted Thai premier Thaksin Shinawatra has more than doubled the reward offered by police for the capture of those behind this week’s deadly Bangkok bomb blast, putting up nearly $200,000.

In a post on Facebook, Panthongtae Shinawatra said his father would give $56,000 for a tip-off leading to the arrest of the man who planted the explosive, and $140,000 to officials involved in capturing the suspect, local news website The Nation reported.

“I have been given permission from my father to give seven million baht ($196,000) ,two for any informant and five million for those officials who investigate and make arrests,” he wrote on Friday.

“In order to swiftly regain confidence and morale among both Thais and foreigners we have to arrest the suspect as soon as possible to make everyone realise that Thailand is not [a] place where this kind of thing can happen and you get off scot free,” he added.

With no arrests and few clues on the identity of the main suspect in a yellow T-shirt seen leaving a backpack at the shrine moments before the fatal blast, police have offered a three million baht ($84,000) reward for any information that leads to the capture of the assailant.

That offer has now been more than doubled by the Shinawatra family. Thaksin, the former prime minister, currently lives abroad in self-imposed exile after a corruption conviction that he insists was political.

An arrest warrant has been issued for the main suspect, who is described as an unnamed foreign man with shaggy hair and thick rimmed glasses.

It is not known if the suspect has already fled the country, while authorities have also openly questioned whether he could be half-Thai or a Thai wearing a disguise. 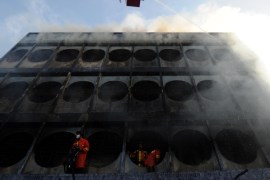 Series of explosions kill at least six and wound 11 others, some at a karaoke bar in border town of Padang Besar.