Gaza City – In July 2014, 30-year-old Mahmoud Abu Shaqfa was playing with his children in al-Shati refugee camp in Gaza, celebrating the first day of Eid when an Israeli missile hit.

The blast killed his eight-year-old son, Mohammad, his uncle and 12 other children.

Abu Shaqfa and his youngest child, Khalid, were among the many wounded, with Khalid suffering a head injury from shrapnel. While he is sceptical as to whether his son can be treated properly in Gaza given his complicated condition, Abu Shaqfa is hopeful that a visiting medical delegation will be able to treat the boy’s wounded arm.

One year after Israel’s 51-day offensive on Gaza, which killed more than 2,200 Palestinians and injured 11,000 others, a British medical delegation from King’s College Hospital continues to travel to Gaza on a regular basis to treat the many wounded. Gaza suffers from a severe shortage of medical supplies due to the Israeli and Egyptian siege of the Palestinian territory.

The orthopaedic and plastic surgeons from King’s have been coming to Gaza since 2009 to treat seriously injured people, train surgeons and provide equipment. Their main project has been to educate and train doctors and surgeons in Gaza on primary trauma care. After the 2014 war, they began performing operations at Gaza’s main al-Shifa hospital.

Orthopaedic surgeon Graeme Groom, 61, said his colleagues’ work has enabled patients at the hospital to receive the same level of treatment they would receive at a hospital abroad.

Since 2007, when the siege began, Gaza has been afflicted by frequent electricity cuts, a water shortage and lack of medical supplies. Due to a lack of specialists in fields such as plastic surgery and limb reconstruction, many patients in Gaza have lost their trust in the ability of local hospitals to treat their often complicated injuries.

“We were able to visit Gaza during the war and to see what had happened, and to see the devastating injuries in their early stages,” said Sarah Phillips, a consultant orthopaedic surgeon at King’s College Hospital.

Moving patients away from their families for long-term treatment is difficult and not necessarily conducive to the patient’s healing, Phillips said, noting that if patients can be treated within Gaza, “it is easy for follow-up, and it is easier for them mentally to be able to go through a long-term process”.

Doctors told Al Jazeera that one of the most serious – yet, also most inspiring – cases was that of 10-year-old Wiam al-Astal, a friendly girl who lost her leg when a drone missile hit her and her father, Mohammad, as they were walking back to their house.

Wiam was transferred to a hospital in the occupied West Bank and received an Ilizarov apparatus, a device used to lengthen or reshape limb bones. A Nablus-based organisation, Palestine Children’s Relief Fund, helped her travel to Saudi Arabia for two months, where she received a prosthesis.

Back in Gaza, the British doctors have been following up on her condition since last November, and they say it has improved. But Wiam still does not want to talk about what happened to her.

“What matters now is that I’m happy and that I’m walking again, so I can play with my siblings,” she told Al Jazeera.

“A year has passed [since] the incident,” he father added, noting Wiam was paralysed and confined to a wheelchair for the first 10 months after the attack. “It’s a painful memory, yet, it also came with a great improvement that my daughter is now back. She’s happy and can walk.”

Said al-Awawda, 56, an athlete and administrator of a sports club, was also injured in the 2014 war. Shrapnel tore into his leg when Israeli forces fired shells on his neighbourhood, in violation of a ceasefire – putting an end to his athletic career.

“My life has stopped now,” he told Al Jazeera. “I don’t like to be frustrated, but I have lost everything. I can’t move freely or do anything I used to do before the war.”

Awawda also received an Ilizarov apparatus three months ago in Gaza, and a bone transplant was performed by the British delegation. He was then transferred to al-Makassed Hospital in Jerusalem for almost a month to get treatment for his leg, along with a skin transplant. He is now receiving follow-up treatment from the international doctors in Gaza, and has shown substantial improvement.

In Gaza’s largest hospital, there are only 583 beds, and there is a shortage of almost everything. To support the limb reconstruction and plastic surgeries, the delegation had to carry the necessary equipment with them, aided by the UK Ministry of Health and partner charities. They spent more than $775,000 on the equipment.

“The feeling in the UK was that we should do something to help, and eventually the government responded and offered aid,” Groom said. “People we have known for months and months, who’ve had terrible injuries and who are now getting better – it’s fantastic to come and see them.”

Meanwhile, the UN’s humanitarian coordinator for the occupied Palestinian territory, Robert Piper, expressed concern over the humanitarian situation and the slow pace of reconstruction in the Gaza Strip.

“Gaza is still in crisis, with civilians as always paying the highest price,” he said. 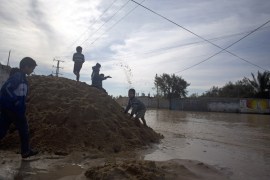 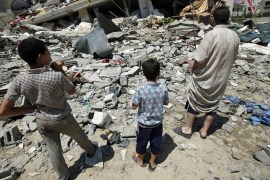 UN: Possible war crimes by both sides in Gaza