As the war in Syria rages on and bombs continue to rain down on civilians, it is often a group of ordinary citizens who are the first to enter the destroyed buildings, scouring through the rubble and debris in search of bodies and signs of life.

Known as the Syrian Civil Defence, or the White Helmets, this group of volunteer rescuers was formed in 2013 and now numbers more than 2,700 volunteers.

Rushing to the epicentre of the most volatile parts of the country, these Syrian men and women often risk all to save members of their community.

Al Jazeera: Who are the White Helmets?

James Le Mesurier: The White Helmets are a group of Syrian volunteer rescue workers who self-formed in the early part of 2013 to respond to bomb attacks against civilian communities by the Assad regime.

They started as a completely ad hoc, voluntary organisation that the Turkish rescue trainers and I started training and supporting in the early part of 2013, [initially] training a single team of 20 people.

Over the last two years, they’ve grown to [about] 2,790 odd volunteer men and women … that operate from 110 different locations all across Syria. They have saved more than 24,000 people.

AJ: Who are the members? Are they trained rescuers?

Le Mesurier: Every single [member] is Syrian, and every single one of them – two years ago – had a completely different job.

They are made up of former bakers, builders, taxi drivers, students, teachers, pretty much anything apart from rescue workers.

They are all a very diverse and disparate group of individuals, all of whom made individual choices about what their contribution to the revolution is going to be. They all had the choice whether or not they want to pick up gun, to become a refugee – but they’ve all made a choice to instead pick up a stretcher.

AJ: How did the organisation come about?

Le Mesurier: It started with the regime bombardment of areas that were being described as liberated so by the end of 2012, areas in northern and southern Syria the regime had pulled out of areas and that gave the regime the space […] to start bombing civilian communities.

From within those communities emerged… individuals, who, when a bomb fell down on the street, would run out and try to help their neighbours, and they did so without training and without equipment.

In the early part of 2013, a group of leaders from northern Syria came out and painted this very clear picture that communities on the ground were being very heavily bombed, and they needed support.

[The Turkish earthquake rescue volunteers had never worked in a war zone. I had, but didn’t know much about search and rescue]. But, it all came together with an initial training course of 20 guys from northern Aleppo, then spawned from one team to 20 teams.

AJ: Is their motto to rescue anyone?

Le Mesurier: Yes it is. Their motto is actually a verse from the Quran, which is “To save one life is to save all of humanity”, and they’ve very much embraced that.

Over the last 3 years, there have been numerous examples of members responding to bombs [or going into areas] that contained soldiers from the Assad regime. They’ve dug out Iranian fighters that have been fighting on behalf of the regime and members of Hezbollah.

Their view is rather like a doctor and the Hippocratic Oath; their job is to save people’s lives not to judge them.

AJ: What is the motivation behind being a White Helmet and going into extremely dangerous and volatile areas?

Le Mesurier: Each has a different motivation for doing what they do. They experience different emotions – from fear to a tremendous sense of duty.

They fear the “double tap” attacks, which is when the regime will drop a bomb in one location, wait for the rescuers to turn up, and then drop another bomb.

Frequently, in between those first two bombs, there is a very narrow window – 15 minutes or half an hour – where they often find people, aren’t able to get them out, and then a second bomb comes. Many… have been injured because they haven’t gotten away quickly enough, or they have chosen to stay with the people they are trying to rescue.

To date, 97 White Helmets have lost their lives, and about four times that number have been very seriously injured.

AJ: Is there a particular case that stands out?

Le Mesurier: We’ve trained directly now about 1,200 of them, and a question that we regularly ask is: ‘why did you join?’

Each one of them has a very personal story about why they choose to do what they do. Many of those are really compelling.

A recent one that really struck me was when we were running a course down in the south of Turkey – a course predominantly of young men about 25 to 30-years-old – There was one guy there that had a grey beard and… grey hair, I would guess he was in his late 40s or early 50s. We were getting around [introductions] and asked this guy [where he was from] and he was very quiet… He told the story of his son, who had been a White Helmet and was killed during a rescue. This old guy turned around and said, ‘The day that I buried my son, I joined the White Helmets. It’s the most honourable thing I’ve seen during the revolution and I want to honour his name.’

In a recent course, there was a guy who was a White Helmet. His house got bombed and he returned … to find that his son had been killed. He was digging through the rubble to find his own family members.

There is another individual who came off his shift and… went back to his [house], [and was] bombed in his home. His other team mates came and dug him up.

There’s a story of Khaled, the former painter and decorator, who was on a rescue in Idlib. He’d been on a late night shift and he just needed to sleep. They had been responding [to a building that had been hit by a bomb]. There were about 12, maybe 13 people rescued from the building already. He found a flat bit of concrete, and after the 5 to 6-hour rescue, he literally just curled up and went to sleep. He woke up because he could hear the sound of a baby crying. He got his team mates, who all came over, and said ‘Look, I heard a baby crying!’ They dug for 11 hours in that spot, and [rescued] a 10-day-old baby.

All these people have different things they can do – and they are. All of them are incredible, [but] ordinary people who, everyday as we go about our lives … are not thought of in any way exceptional. Yet, the choice that they have made to do this makes them extraordinary.

It’s difficult to single any one of them out as – to me – they’re all heroes… It’s the choice they make to do this that makes them exceptional. 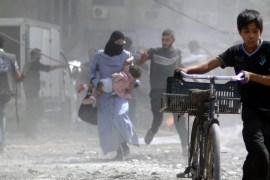 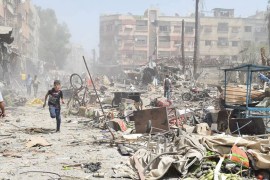 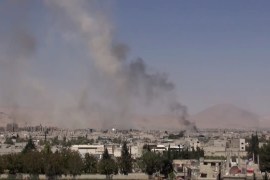