Thousands of dead fish have been found stockpiled on the riverbank of the city of Tianjin, several kilometres from the site of last week’s giant chemical blasts that killed more than 100 people and injured hundreds of others.

Local officials on Friday apparently sought to allay suspicions that the deaths of the fish were linked to the explosions, saying that tests of water samples and dead fish taken from three different spots in the Haihe River on Thursday found neither cyanide nor sulfide.

Authorities have confirmed that more than 700 tonnes of the deadly chemical sodium cyanide were stored at the Tianjin warehouse that blew up.

A report from the Tianjin Environmental Protection Bureau issued on Wednesday said that tests conducted the day before showed that cyanide levels in the river, sea and waste water in the evacuated area around the explosion site had risen sharply since the deadly blasts.

One testing site at the mouth of a rain water pipe recorded cyanide levels 277 times above acceptable standards.

However, officials declared the city’s drinking water supply was safe for consumption and tried to dispel fears about dangerous chemicals in the air and water.

In an attempt to calm suspicions of toxicity, authorities placed rabbits, chickens and pigeons near the scene of the explosions, according to the Reuters news agency.

The birds and animals, held in small, brightly coloured cages, survived spending two hours at the site of the blasts, local media reported.

City officials have repeatedly said contaminants found in the wake of the blasts, including deadly sodium cyanide, pose no risk to the public.

The developments came amid growing public fury over the government’s alleged mismanagement that residents say led to the blasts.

Residents also accuse the government of failing to compensate them for the grave losses inflicted by the blasts, including widespread destruction of residential buildings and other properties. 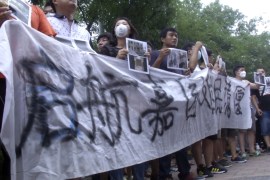 At least 400 people gather for “spontaneous protests” in Tianjin condemning government response to the incident. 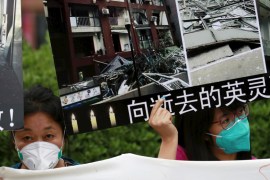 Dozens of people whose homes were damaged demand compensation as anger simmers over latest industrial accident. 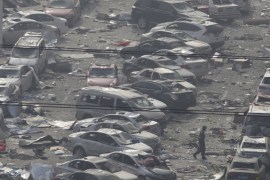