Jean-Marie Le Pen has been expelled from the National Front party he founded after complaints about comments he made that belittled the significance of the Holocaust.

Le Pen has for years been in conflict with his daughter Marine, who took over the leadership of the party from him in 2011 and had tried to steer it away from its overtly racist and anti-Semitic policies.

The party’s executive committee questioned the 87-year-old in the French city of Nanterre on Thursday for three hours and voted to exclude him, pushing him out of a party he led for close to four decades.

Le Pen immediately announced his intention to appeal against the decision in court.

“There is indignation, there is sadness, it’s always trying when one has the feeling of not having made any mistake, of having expressed one’s opinion as a politician,” he told the iTele television network.

In April, the elder Le Pen rehashed familiar comments about gas chambers being a “detail” of history and said France should get along with Russia to save the “white world”.

Marine openly split with her father, saying he was committing “political suicide,” and later suspended him from the party.

But Jean-Marie successfully challenged his suspension in court and barged onto the stage during a major party rally in May.

In a sign of how deep the rift with his daughter had become, he told a local newspaper on Sunday that he would not vote for her in 2017 presidential elections.

Marine and her deputy, Florian Philippot, stayed away from the meeting of the party’s executive committee to ensure “total impartiality”.

“Jean-Marie Le Pen kicked off a process of which he knew the outcome by multiplying mistakes over many weeks, which could only lead to this kind of decision,” Marine said in a statement after the decision was announced.

Distancing the party from its founder is part of her efforts to bring it into French mainstream politics and boost its popularity before the presidential elections. 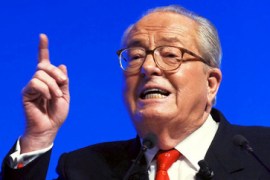 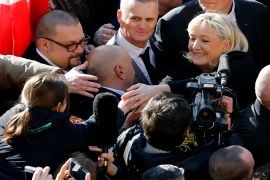 Rise of the right after France attacks

As the country tries to make sense of the bloody events, one political party is ready to seize the moment. 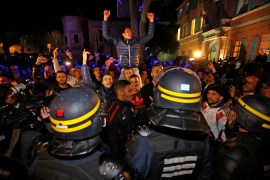