At least two soldiers have been killed and 24 others wounded in a suicide blast allegedly by Kurdish fighters in eastern Turkey, officials say.

The governor’s office for Agri province said that fighters from the Kurdistan Workers Party (PKK) attacked a military police station with a truck laden with two tonnes of explosives early on Sunday.

The attack in Agri city came amid an escalation of violence between Ankara and the PKK, with Turkey conducting almost daily airstrikes against PKK bases in northern Iraq, and the fighters attacking security forces.

At least 24 people have been killed on the Turkish side in the recent unrest, most of them soldiers.

On Saturday, Iraq’s Kurdistan regional government, called on the PKK to withdraw from its territory to prevent more civilian deaths, amid the Turkish military campaign targeting the group.

Related: Turkey and PKK ‘back to square one’

The statement also condemned Turkey for bombing civilians, following reports that homes were damaged in airstrikes in northwestern Iraq, while calling on both parties to resume peace talks.

Turkey launched the offensive against the Kurdish fighters about a week ago, which effectively ended fragile peace talks, following a rise in deadly violence in the country.

“By carrying out the recent attacks, Turkey has practically and unilaterally ended the state of non-conflict and the peace process,” said Zagros Hiwa, the spokesperson for the Kurdish Communities Union, the PKK’s political wing, from Iraq’s Qandil Mountains, where Turkish bombing raids continue.

Several dead in Turkey in attacks blamed on PKK group 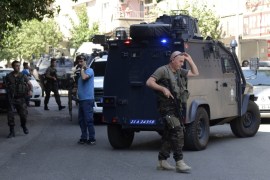 Three soldiers, a policeman, and a civilian die in the latest attacks allegedly launched by Kurdish fighters.