Iraq’s Kurdish regional government has called on the Kurdish Workers’ Party (PKK) to “withdraw” from its territory to prevent civilian deaths, amid a campaign of Turkish air strikes targeting the group.

In a statement issued on Saturday, Kurdish President Masoud Barzani said the PKK “should withdraw its fighters from the Kurdish region so to ensure the civilians of Kurdistan do not become victim of that fighting and conflict”.

The statement also condemned Turkey for bombing civilians, following reports that civilian homes were damaged in air strikes in northwestern Iraq, while calling on both parties to resume peace talks.

“We condemn the bombing, which led to the martyrdom of the citizens of the Kurdish region, and we call on Turkey to not to repeat the bombing of civilians,” the statement said, prompting a response from Turkey, which vowed to launch a probe on the reported deaths of nine civilians.

Inside Story: Has Turkey bitten off more than it can chew?

She said the presence in Iraq of the PKK, which is considered a “terrorist organisation” by Ankara and the US, is a “thorn” on the side of the Iraqi Kurds.

“We must remember that there’s a long history of conflict between the two groups,” our correspondent said.

The division is “playing into the hands” of the Islamic State of Iraq and the Levant (ISIL), which remains in control of vast territory in Iraq and Syria, she said.

Despite the demand to leave northern Iraq, it is unlikely that the PKK would leave the region, Fadi Hakura, a Chatham House Turkey analyst, told Al Jazeera.

“They are situated in some of the very, very inhospitable mountainous environment. It will be extremely difficult for any group, army or militia to remove them from their bases.”

Turkey launched air strikes on Kurdish rebel camps in northern Iraq last week, its first such strikes since a peace process with the Kurds was launched in 2012.

The air strikes began as the US and Turkey announced the outlines of a deal to help push the ISIL group back from a strip of territory it controls along the Syrian-Turkish border, replacing it with more-moderate rebels backed by Washington and Ankara.

On Friday, the Kurdish regional government accused the PKK of attacking an oil pipeline in northern Iraq.

Tensions between Barzani’s Kurdish Democratic Party and the PKK of Abdullah Ocalan in Turkey date back decades. The two groups were opponents in a 1990s civil war, which ended in an accord that allowed PKK fighters to remain in Iraqi Kurdish territory.

In recent months, the PKK joined an uneasy alliance with Iraqi Kurdish fighters, known as the Peshmerga, and the main Syrian Kurdish militia to fight against ISIL in northern Iraq and Syria.

Turkey’s state-run Anadolu Agency said Saturday that as many as 28 F-16 jets raided 65 PKK targets in northern Iraq, including shelters and ammunition depots on Friday. A day earlier, as many as 80 jets hit more than 100 targets, the agency said.

Anadolu claimed some 260 PKK rebels were killed and 400 were wounded since the start of the raids. The PKK has not reported on its casualties.

In Syria, meanwhile, the Kurdish militia there said the Turkish military has targeted them four times since July 24, calling such attacks “provocative”. 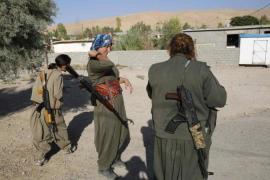