Duma, occupied West Bank – Pulling out his smartphone, Hassan Dawabsheh stares at pictures of his nephew Ali, the18-month-old Palestinian baby who was killed in an arson attack on his home on Friday.

“Ali was always smiling and laughing,” Hassan said. “He was so young, so innocent.”

The arson attack, carried out by suspected Israeli settlers, has been labelled an act of “terror” by both the Palestinian and Israeli governments. Outrage over the killing sparked demonstrations throughout the Israeli-occupied West Bank and Gaza. Two Palestinians were killed by Israeli soldiers amid the protests on Saturday.

Ali’s father Saad and his wife Reham remain in critical condition on life support in hospital with up to 80 and 90 percent burns respectively, while their remaining son, 4-year-old Ahmed, is being treated for 60 percent burns.

“It’s tragic, I can’t explain it. There are no words I can use,” Dawabsheh told Al Jazeera. “We remember what happened to Mohammed Abu Khdeir. No one is able to help us and give us [our] rights.”

The killing has drawn international condemnation and evoked memories of the murder of Mohammed Abu Khdeir, a 16 year-old Palestinian who was kidnapped from his home in East Jerusalem and burned alive by Israeli settlers last July.

“If they take no measures to stop these things, it’s going to happen again. It happened before, it has happened now and it will happen in the future,” Dawabsheh said.

That sentiment is shared by the Dawabsheh’s neighbours, whose house was also set ablaze in the attack. The parents and their five children were not at home at the time, but they came straight to Duma once they heard about the attack. They found the first floor of their home burned and Hebrew graffiti scrawled on two walls, stating “revenge” and “long live the messiah”.

Treading carefully over broken glass and the charred remains of her front room, Umm Mustafa said the attack left her fearful for the future.

“I am shocked. We haven’t done anything to them,” she told Al Jazeera. “The settlers are not even our neighbours. Duma is a very calm, quiet village that has done nothing to anyone.”

A sleepy village of around 3,000 inhabitants, Duma’s men mostly work in the public sector or in the construction industry in Israel. Two Israeli settlements, Maaleh Efraim and Shilo, both illegal under international law, are located within a few kilometres.

Palestinians cannot carry weapons, for Israelis' security. But for Palestinians, there is no such thing as security.

Last year, Israeli settlers torched two cars in Duma and they have destroyed olive trees on village land before, but they had never done anything this bad, Umm Mustafa said.

“We do not feel safe. I am considering leaving the village and moving to Nablus permanently,” she said. “Palestinians cannot carry weapons, for Israelis’ security. But for Palestinians, there is no such thing as security. How can you feel safe in your house after this? I was lucky. I was just lucky I was not here.”

The United Nations Office for the Coordination of Humanitarian Affairs has recorded 120 incidences of Israeli settler violence against Palestinians and their property in the occupied West Bank and East Jerusalem to date this year.

Human rights group Al-Haq has recorded 42 incidents of settler violence against Palestinians in the occupied West Bank and East Jerusalem between January and May 2015. The group’s general director, Shawan Jabarin, told Al Jazeera that attacks by Israeli setters against Palestinians had become more intense over the past two years.

“Where they have burned books, they will ultimately burn people as well,” Jabarin said, citing a famous line from German playwright Heinrich Heine’s Almansor play.

According to a July report from the Israeli human rights organisation Yesh Din, 85 percent of investigations into allegations of Israeli settler violence against Palestinians are closed by the police, due to their failure to locate suspects or find evidence. The group also reported that only a third of legal cases resulted in full or partial convictions.

“There is no accountability. Because of that, the settlers feel they are enjoying impunity,” Jabaran said. “We have to put it in this context. The big picture is that Israeli settlers are attacking, shooting and burning Palestinians every day. If you ask me if this will be the last time, I would say ‘no way’. The soldiers, the commanders, the Israeli political leaders are part of the crime.”

At the Dawabsheh’s ruined home, Saad’s cousin Waf, 26, said that the family would help build a new place for the couple, just in front of the burned house.

As for the gutted structure that still stands, he thinks it should not be destroyed.

“We will leave the house as it is, as a memorial and a reminder of the violence of the settlers,” Waf said. 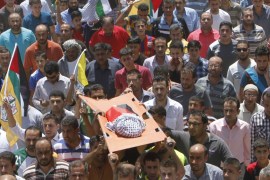 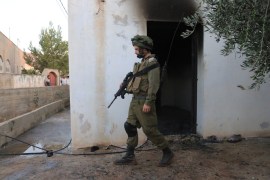